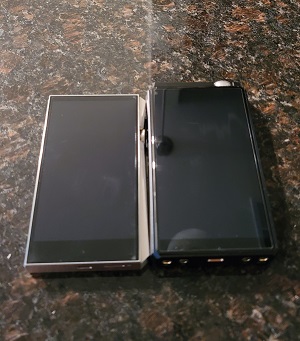 Astell & Kern SP2000 vs. Hiby R8. Astell & Kern SP2000 is their TOTL DAP priced at a whopping $3500 and the Hiby R8 TOTL at $1900. This is not a comprehensive review drilling down into the all of the features and settings. It is more of a comparison of two TOTL powerhouses to assist you in making a purchase.  The difference in price points will provide a good compare and contrast, between mid-tier pricing and elite-tier pricing. 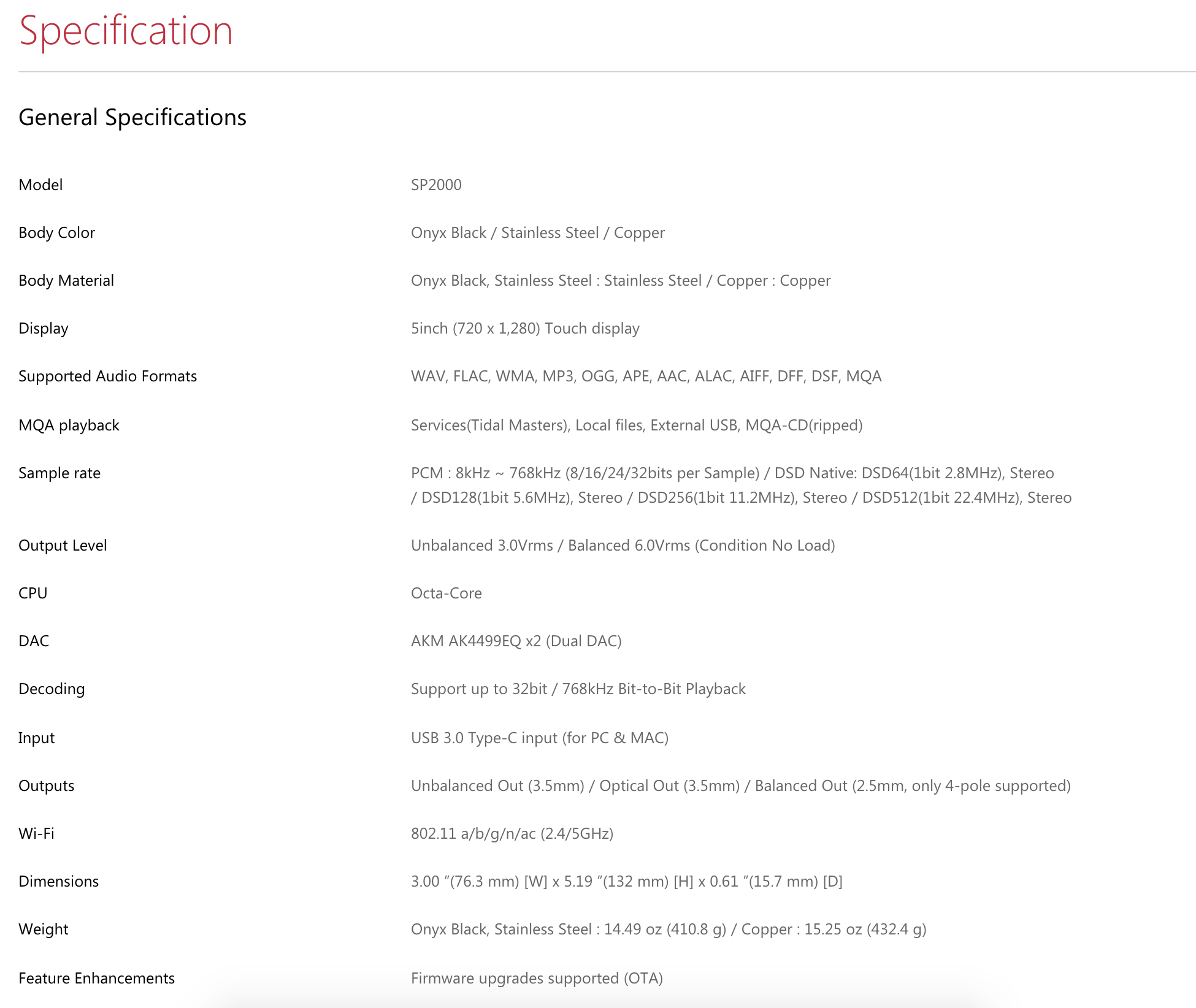 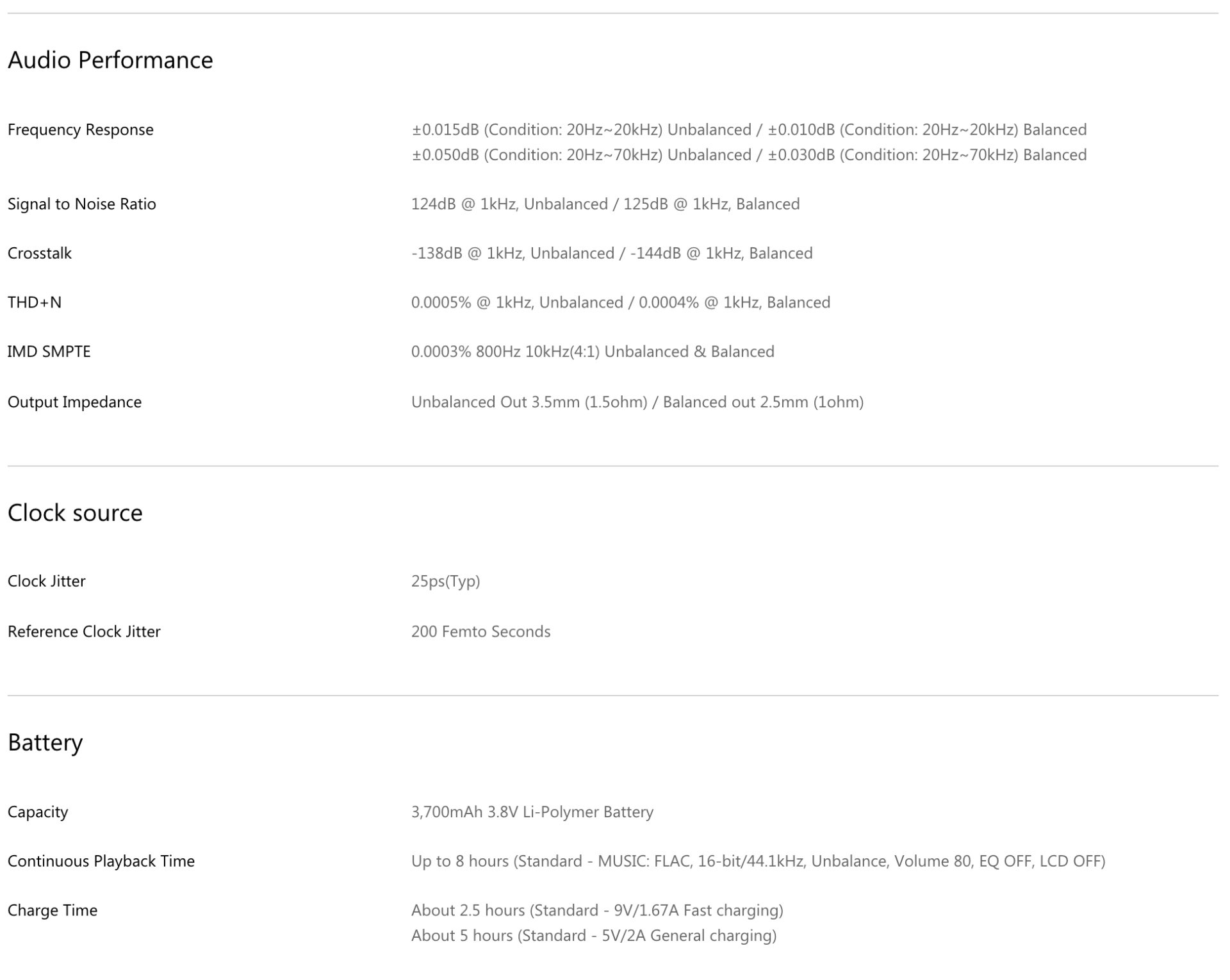 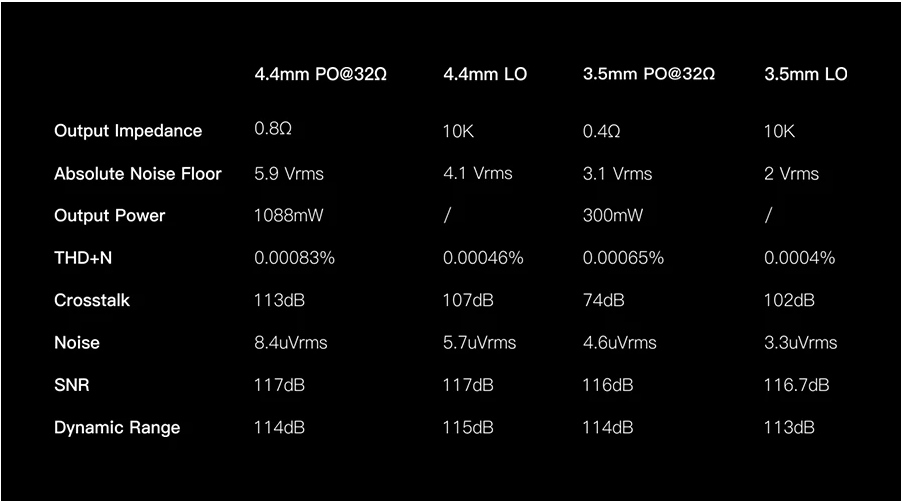 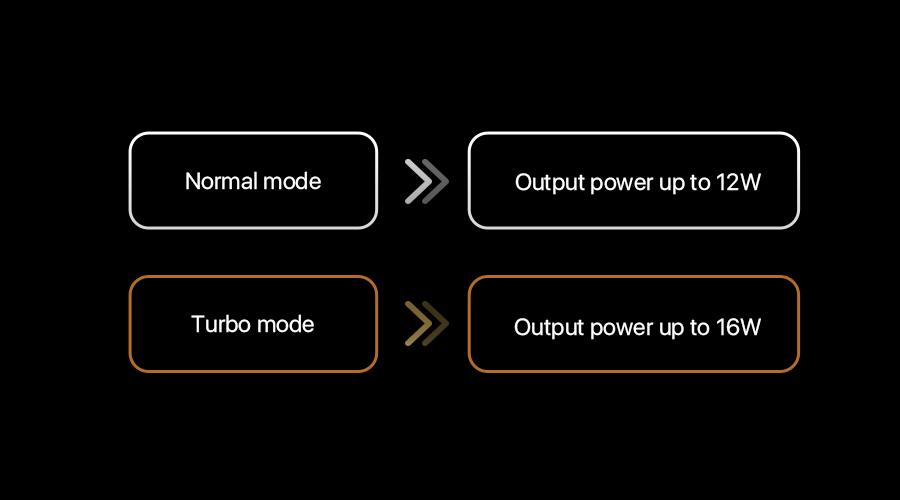 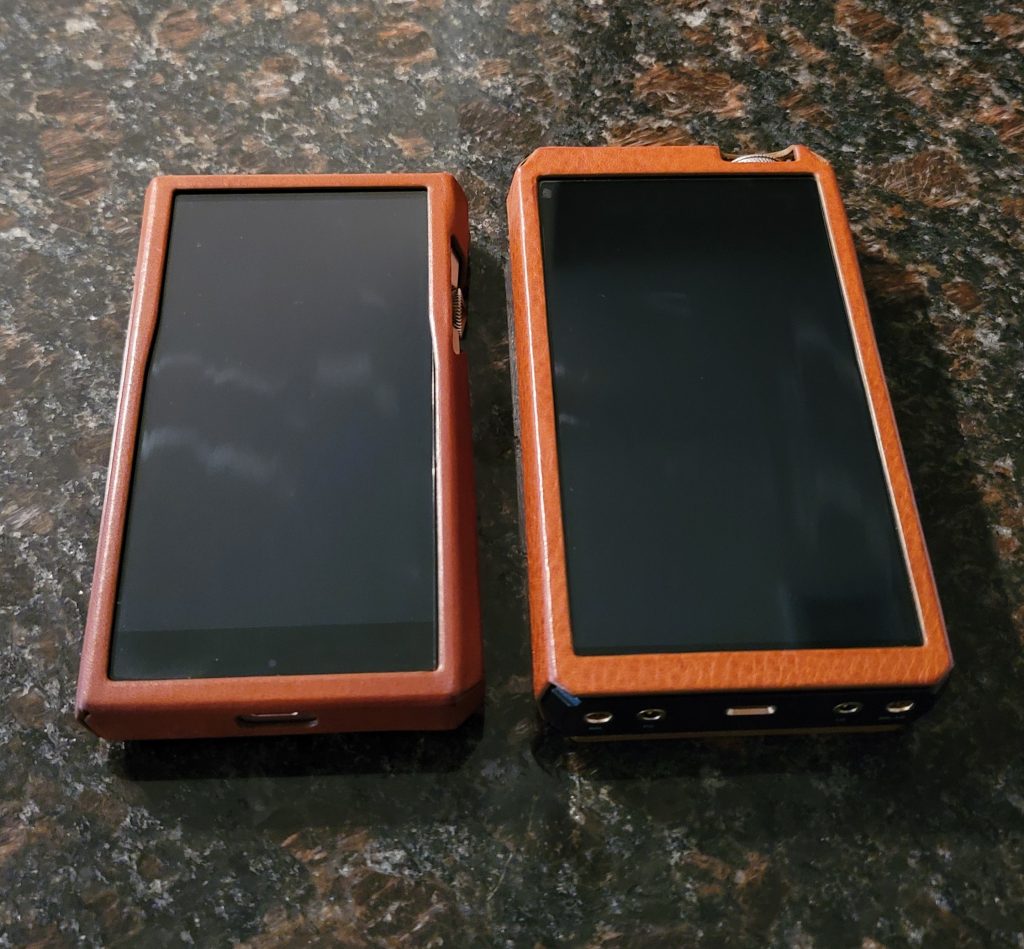 I want to share some SP2K unboxing photos. While the wooden box is premium, this experience is not close to the unboxing experience of the R8. 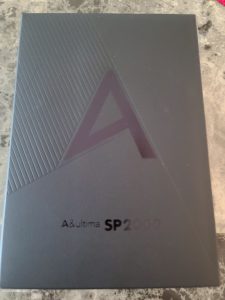 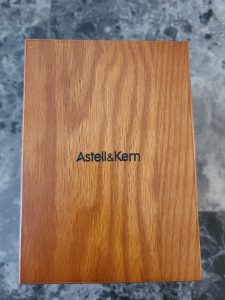 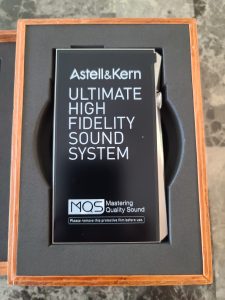 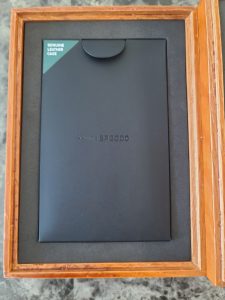 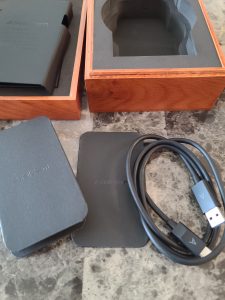 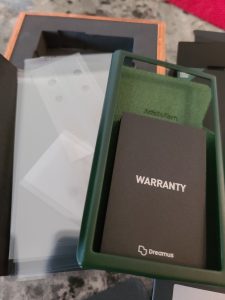 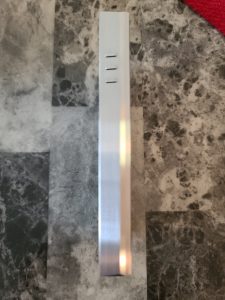 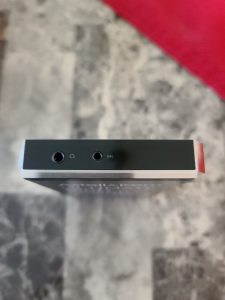 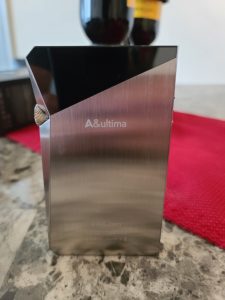 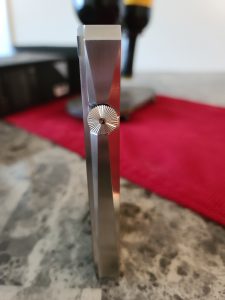 As an early adopter of the the R8 I received a Dignis leather case for the Hiby, as can be seen in the Hiby R8 unboxing link above. I have seen photos of the stock R8 case and it appears to be a little less luxurious in the leather, but I do like that it covers the bottom of the DAP. The Dignis case is open on the bottom and the R8 is super heavy which causes the DAP to slide down. I have no fear of the DAP sliding all of the way out of the case and slamming to the floor, but it does slide. The SS SP2k includes the green leather case you see above, the brown case you see in the photos is a Dignis case which was an extra purchase.

I have tried many A/B tracks and while I am not a Dua Lipa fan or pop music in general, her stuff is produced incredibly well and the song Don’t Start Now is great for critical A/B’ing. 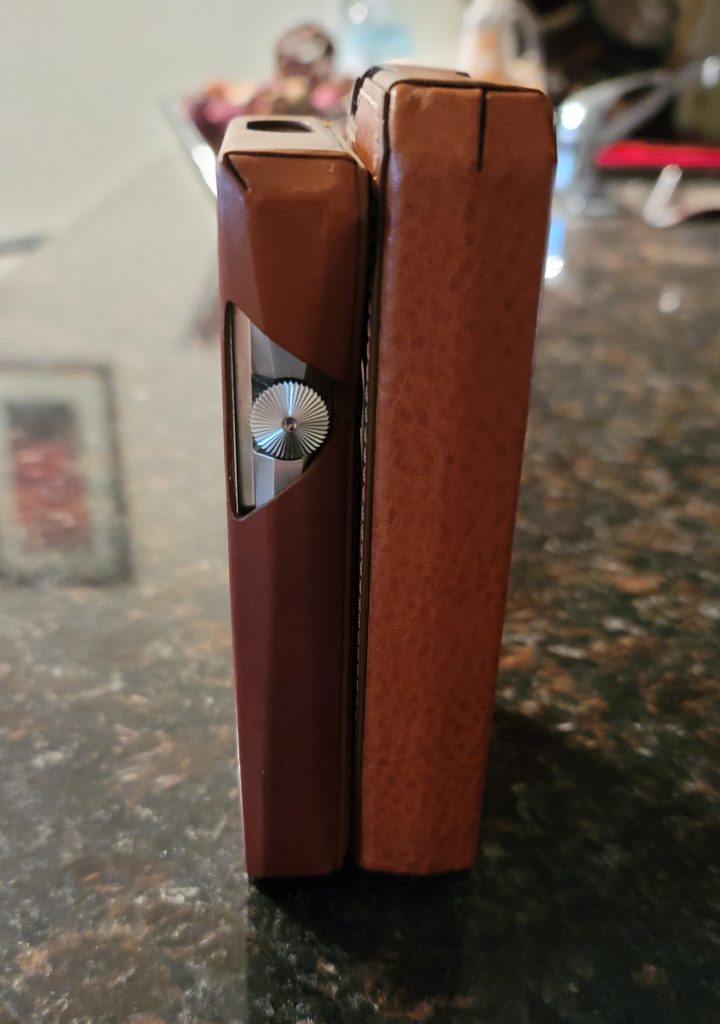 The R8 has more bass quantity with more of a rumble, but it is close between the two. There is more detail and layering to the bass and less bloaty, more separation with the SP2K. Subjective preference which  signature you will prefer.

Not much coloration in either device and the mids. Both are fairly reference sounding, very similar, a touch more lift and forwardness in the mids on the R8. The tonality is definitely reference in both devices.

The stage is wider on SP2K and more defined. There is also a touch more depth to the stage of the SP2K. 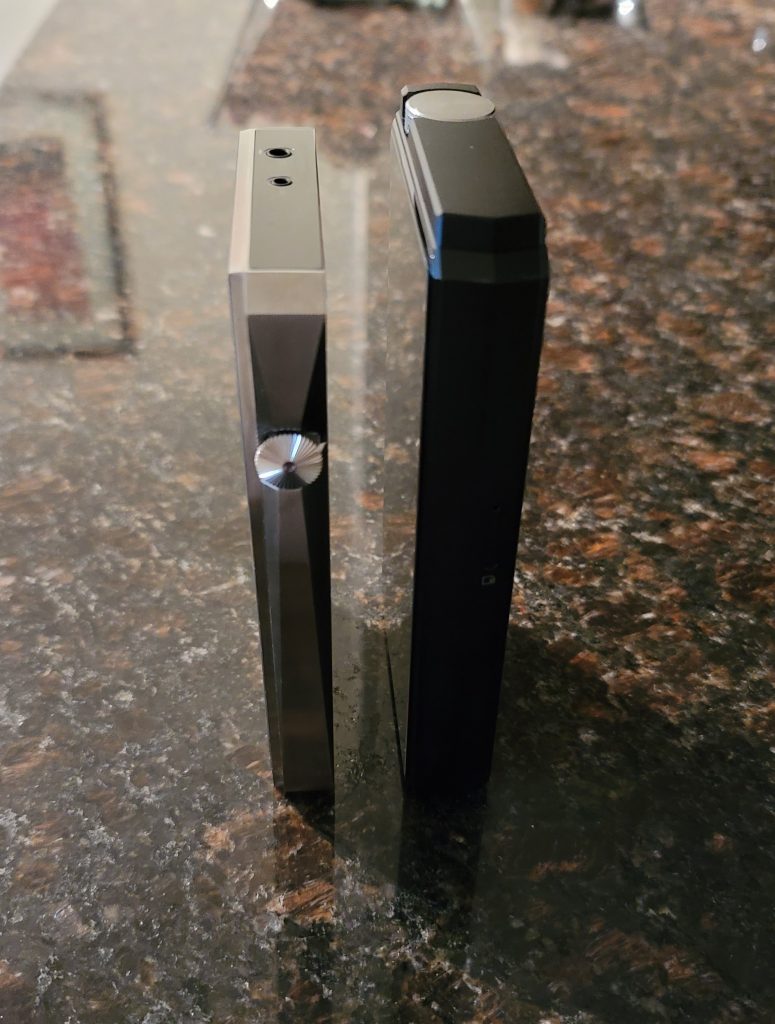 SP2K has a touch more balance overall as well the amount of layering to your music. There is more of “everything” to the music. Meaning, more layering, more detail, more balance just more complete.

Size wise, the units are very similar with the SP2K having a better form factor. The DAPs are heavy and while neither are the most pocketable, the

SP2K would be my choice. You skinny jeans folks, good luck with either.

UI is always top notch and best in class with the A&K Daps, and of course the SP2K is virtually bug-free and polished. The HIBY UI is also superior to many other big name DAP manufacturers, you cannot go wrong with either. 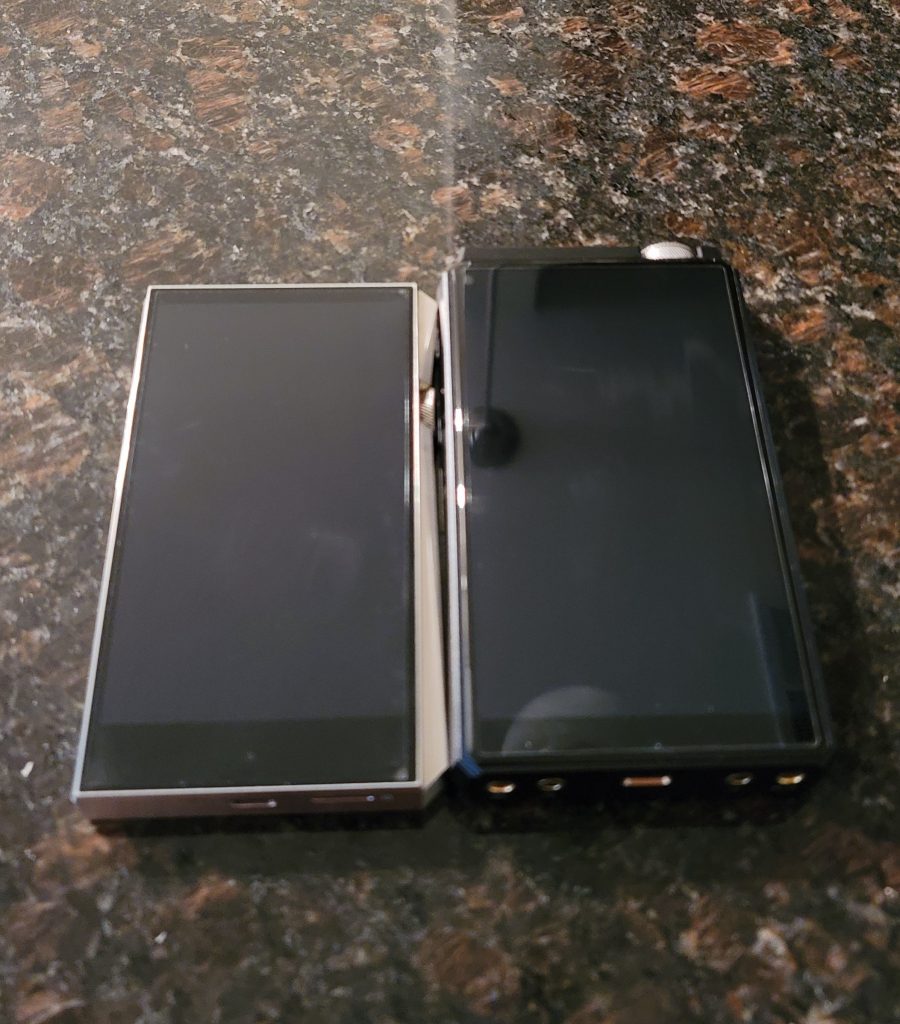 The main difference between the two units is, while the SP2K delivers a relatively lag free experience, the HIBY and it’s TOTL specs is snappy and speedy. The R8 is the fastest DAP I have seen.  It is a full Android device which has access to the Google Playstore, so you can download all of your streaming apps, web browsers, YouTube and so on. The SP2K streams well but requires a APK sideload for anything but Deezer and Tidal which are part of the included services. There is a rumor circling that Qobuz could also become an included app in the SP2K

The Hiby R8 has a 38Wh ATL custom battery, with pure Co material and high power density, truly high capacity! High power density and low internal resistance, capable of continuous 10000mA current output. and I have found the battery life to be awesome. I use all three gain settings, Low, Medium and High, but the DAP is always on Turbo mode, which helps to drive harder to drive IEM’s and HP’s, but I have found even with the items easily driven, provides a wider sound stage.

The SP2000 has a 3,700mAh 3.8V Li-Polymer Battery. There are no gain settings on the DAP, and I have found the battery life to be adequate but it is bested by the Hiby.  It really is close when playing at similar volumes and higher bitrate files.

Build quality, the SP2K is impeccable in design, but uses glass on top and cascading slight over the top of the back of the player. Volume knob is much better than on the R8, not a fan of “dead turns” Don’t drop this unit. The R8 build quality is premium in its all black body, and without the glass is probably a bit more durable.

The screens are both quality, but it is very clear that the tone of the SP2K veers towards yellow and the Hiby toward a colder blue hue. Without a doubt the Hiby is more natural and bright. The R8 also has the edge in clarity. The photo was taken in a dim room with the brightness full on each device.

Overall, the nod clearly goes to the higher priced SP2K, for my personal sound quality preference. I use the word clearly, but factoring in price, the gap narrows quickly. Based on an overall package, it is so difficult to ignore that the R8 has stacked the deck, with it’s speed, features and and unboxing.

This comparison was done with critical A/Bing. I own both DAPs and was listening to the complete song, multiple times, for each of the various areas I was comparing. Keep in mind, most people wont’ do that and don’t have both of these DAPs. What does that mean? It means you will not be unhappy with either DAP. If money is of little concern, go with the A&K, but keep in mind the sound differences were done with a critical ear, YMMV.