Get them here! Bloom Audio

“The perfect in-ear monitor for listeners looking for the sweet spot between reference-level clarity and a smooth sound signature for extended listening. The tia Trió is a great earphone for audiophiles seeking a clear, laid back, 3D sound in any genre.

“An open balanced armature speaker design for realistic resolution and transparency. By opening a balanced armature, the diaphragm becomes fully unobstructed, reducing resonance in the IEM and allowing sound to travel more naturally to the ear.”

“A huge advancement in eliminating unwanted tube resonance. The large bore itself serves as a sound-shaping chamber and aids the tia high driver in delivering a linear and coherent frequency response. The short sound path provides remarkable high-frequency extension and smoothness. The large single bore also allows for easier maintenance”

“Apex, or Air Pressure Exchange, is a pneumatically interactive vent that releases air pressure from a sealed ear canal. It comes in two variations, m15 (-15dB) and m20 (-20dB).”

“When you seal a miniature speaker in an ear canal, the air inside becomes trapped. Apex relieves this air pressure, allowing the eardrum to move naturally, so you can comfortably listen longer.”

“Custom in-ear monitors provide amazing isolation and help you hear your mix more clearly and at lower volumes than a wedge monitor or earbuds. Apex lowers decibel levels while preserving the clarity of the sounds around you, so artists on stage can connect with their audience while protecting their hearing.”

“LID, or Linear Impedance Design, enables a consistent, reliable sound regardless of what source. This proprietary circuit corrects the non-linear impedances of the drivers, restoring proper interaction with the source and preserving the desired sound signature.”

“Whether you’re a musician plugging into a variety of gear at different gigs or studios, or an audiophile listening from low-impedance sources, LID ensures your IEMs are delivering the desired sound signature consistently.”

“And like all our IEMs, this model can be used with a wide range of personal audio devices as well as all hard-wired and wireless monitor systems.” 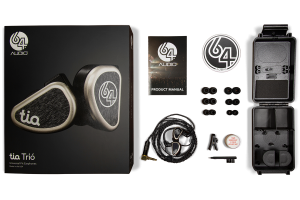 The 64 Audio Trio has more of a “U” shaped signature than a “W”, but it almost presents like a “W” due to the vocal forwardness and clarity. The bass is deep and impactful without spilling into the mids. The mids are neutral and slightly forward in the upper registers but tastefully so. The upper mids transition with similar tonality into the dynamic and crisp treble which just adds such depth and coherence to the sound. The sound stage is nice and open; airy with a pitch-black background thanks to LID. Sounds just float around you with great precision which adds to the experience. Nothing sounds veiled or recessed, you get a bit of everything but not too much of anything.

The 64 Audio tia Trio is admittedly one of my favorite IEM’s to date. Only bested by the Legend X and Odin. They emit some of the most clearly defined and fun notes simultaneously. If I could make any pop culture reference to describe them, it would be the mullet… business up front, party in the back.

They have the technical chops to compete with any TOTL offering and yet they have so much life in their sound. One of the best balances between critical listening and fun tuning I have heard. The Odin bests the Trio for me as highlighted above but you have to respect an IEM that that can even be in that conversation. 64 Audio has demonstrated that they are fighting to put out unbelievably well-tuned offerings and don’t show any sign of slowing down. If you’re in the market for APEX and those crazy expensive 64 Audio Fourte’s or the limited Fourte Noir are invoking your lack of self-control, plunk the cash down on the Trio first. You’ll most likely be very glad that you did.