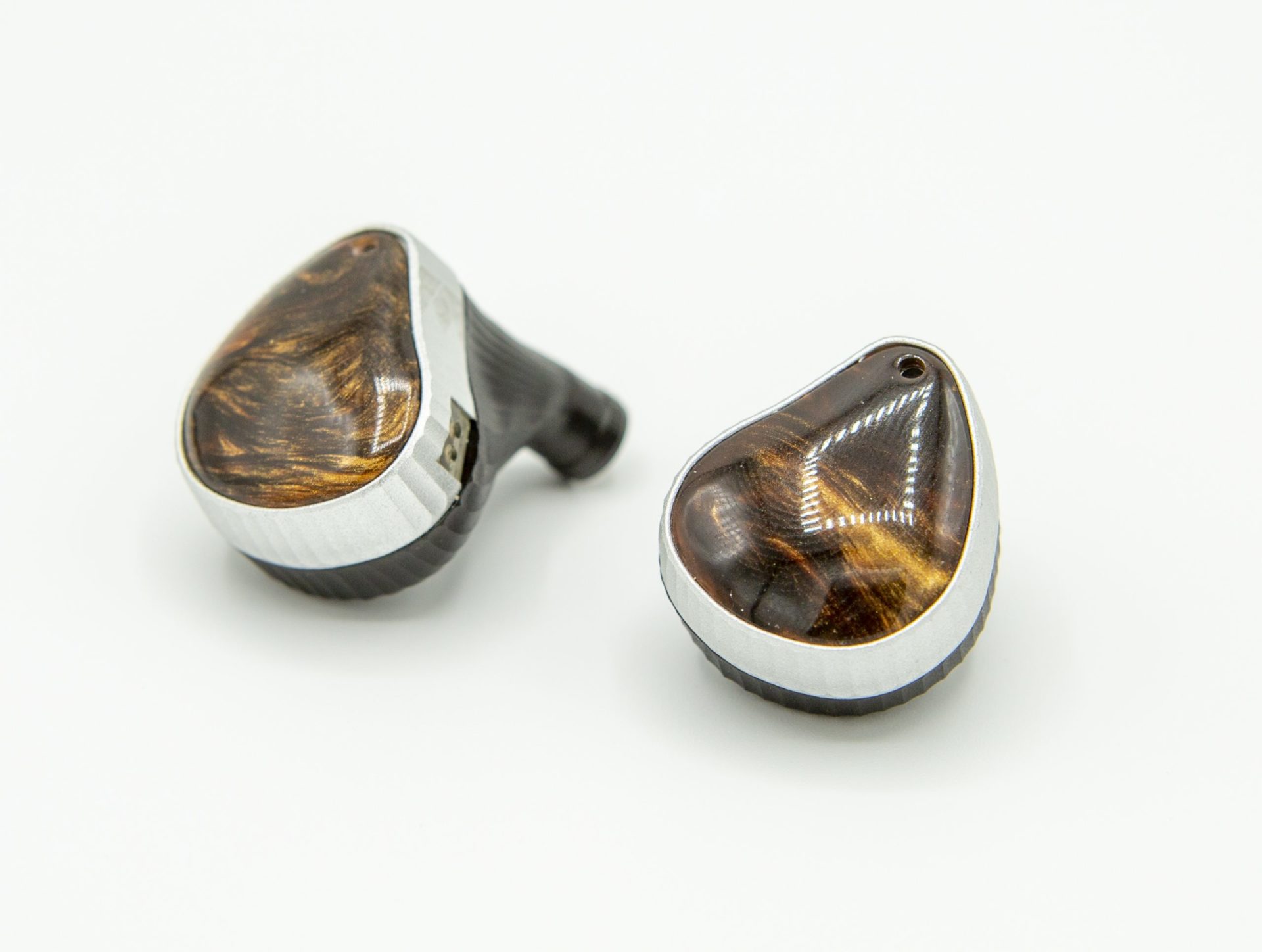 888audio.com, Phone: (850) 888-HiFi (4434) was gracious enough to send me this Sultan in addition to the Noble Vivid cable, on loan, to review the units. I did not receive any compensation and sent both items back after drawing my conclusions

You can purchase the Noble Sultan from the following retailer(s):

To house the internals, the Sultan has an aluminum shell that starts as a solid block of aluminum, which is then carved into its distinctive shape using robotic cutting heads.

The faceplates are all hand-polished, lacquered, and hand-matched to give each Sultan its distinctive and unique look.  The nozzle includes a wax screen and is sufficiently long enough to provide comfort and isolation to a broad range of listeners.

The Sultan provides an extraordinary listening experience, with natural and detailed highs, the perfect amount of mid-range frequency response, and tight yet full bass and sub-bass.” 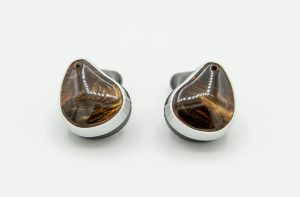 The Sultan, which is Noble’s current top of the line offering, is often referred to as a “Tri-brid” configuration. The Sultan retains the internal configuration much to the likes of the Noble Khan. Swapped out was the piezoelectric high driver for a dual electrostatic driver. 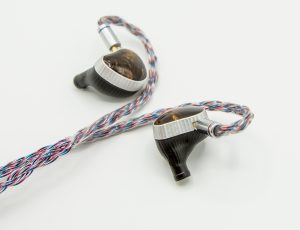 The Sultan feels robust and well-constructed. The aluminum silver and black housing is covered with a laminated faceplate which looks much like wood grain. Although sophisticated, I cannot say I like or dislike the design. It just kind of ‘is’. It seems plain and with all the other types of high-end designs coming from Noble’s competitors, I would have liked to see a little more creativity. Campfire Audio, 64 Audio, and Empire Ears, to name a few, all offer extravagant finishes for its high-end offerings; most recently the Empire Ears Odin which is just a sight to behold in person. I assume they were going for elegance or luxury as is often associated with wood grain or like colors, but I feel it misses the mark quite a bit.

Fit is on par with many other IEM’s on the larger side of things. They are comfortable but they do not disappear in your ears. This is understandable and is expected when you are cramming so many high-end configurations into something relatively small. The nozzle bore is on the larger side and I find larger bored tips fit the best and tips such as the Final Audio E are tough to get on and typically fall off easily. 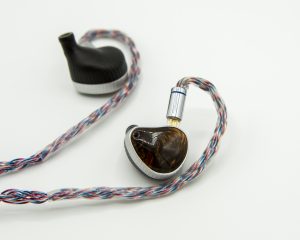 Bass: Once thing is for sure, there is no shortage of sub-bass and mid-bass in the Sultan’s presentation. Quantity is abundant but quality wasn’t anything impressive. Let’s say present and impactful enough to be noticeable but not overwhelming in anything I played.

Mids: Sultans lower mid-range is colored for warmth with full body and presentation. It remains mostly separate from the bass but occasioanlly  I am unable to detect some bleed over. The upper mids seem a bit pulled back or in line with the lower mids. This sometimes lends itself to make the Sultan sound more V-shaped. Don’t misunderstand the context though, the Sultan is still a bit forward-leaning in the mid-range but with the bass elevation, this would be necessary to not lose focus in the mid-range.

Treble: Although bearing dual electrostatic drivers for the higher frequencies, the Sultan does not come off as ultra-detailed. The Treble is slightly pulled back as well, avoiding sibilance but can exhibit harsh peaks. This lends itself to providing decent quality treble but nothing revolutionary or what I would consider best in class. It is a bit more dense and sharp sounding than euphoric and spacious.

After listening to the Sultan for approximately 15 hours (not consecutive) using the standard cable and the vivid cable, I concluded that what was being presented was a dense ‘W’ shaped tuning. There were no major coherency issues despite the blended driver configuration and no frequency really dominated another. The overall sound was very dense, presented in a more in your head or a front and center manner. Lastly, it is not a reference sound, it is not a sound you really would sit around and analyze. That being said,  something was nagging me about its sound… have I heard a better version of this this before? I just could not put my finger on it, until I started comparing it to others.

Disclaimer: Going into this review, I fully planned on comparing it to the Empire Ears Odin but after doing so, it was clear the Sultan did not have the chops. I decided to choose items that resemble its performance and not necessarily its price. Keep in mind, I was testing the Sultan with the vivid cable equipped so It wasn’t the Odin’s included $1300 cable. Odin = $3,399 and Sultan w/ vivid = $4,160. Let’s put that to bed right now.

*Each comparison was done with the Vivid cable to isolate the performance differences within the IEM, removing the variable of different cables and terminations. I also tested the Vivid cable verse the following IEM’s stock configuration for a separate review that will be published shortly, of the Vivid cable. Being that the Vivid did not come with any IEM, including the Sultan, it wasn’t fair to only use it to benchmark the Sultan.*

The Sultan wins out here by presenting a sound that bests the Solaris 2020’s coherency. The Sultan provides a noticeable improvement in bass quality and quantity while not losing the lower mids to occasional bass bleed like the Solaris. The lower and upper mids of the Sultan come across more separated from the other frequencies ranges despite being pulled back. The Sultans treble is more detailed and powerful. It also avoids those peaks or sibilance the Solaris can sometimes render.

The Sultan and the Hero have a similar sound stage and similar sub and mid-bass. The lower mids are slightly more recessed on the Hero than the Sultan but both upper mids come across very crisp and detailed. The treble is where the Hero provides more energy than the Sultan. The Hero is more of an exciting north of neutral treble whereas the Sultan has its upper mids transition into the treble without any elevations.

The Nio is an incredibly unique sounding IEM and I know many people will enjoy it’s warm, lush sound. The Sultan and Nio share similar sub and mid bass presentation but the Sultan pumps out a bit more sub bass to my ears. The mids are thick and warm on the Nio and more transparent or clear on the Sultan. Treble is remarkably similar on both, providing a similar level of density while showing off with the occasional sparkle.

I find the Legend X slightly more refined sounding than that of the Nio, with both more quality and quantity in the bass frequencies. I find that applies to the Sultan as well, the Legend X is just one of if not the best IEM’s in the game for bass. The mids, specifically, the vocals of the Sultan lack a bit of warmth compared to the Legend X, but feel just a tad closer to you or crisper. Treble is a bit smoother out of the Legend X. The Sultan has an equal amount of detail in the treble as the Legend X but sounds a bit denser.

This is a close one and I want to touch specifically on one detail… the cable pairing. In stock configuration (copper) the Legend X sounds like it is scaling back a bit of detail. When paired to a high-end cable, the Legend X really comes to life and is almost an entirely different experience. In this configuration, I feel the coherency is more coordinated and light years better sounding than the Sultan. It oozes richness while being soft and detailed.

…and along came the 64 Audio Tia Trio:

Remember during my ‘presentation’ section where I concluded something although impressive about the Sultan, bothered me. Had I heard this sound before? Surely, I could not have because I never purchased the Sultan or had a place to demo it. It was at the exact moment I removed the Sultan and dawned my 64 Audio Tia Trio that it hit me…. This was the sound I remembered. The Trio was so similar to the Sultan that it was almost indistinguishable, besides a few minor observations.

So, what were those differences? First, would be the Sultan putting out a little more mid-bass (not good). I found that this reserved low end tuning from the Trio actually creates a larger headspace, removing crowding lower frequencies. Mids are pretty much on par with one another, both slightly forward and colored ever so slightly to be north of reference but not overly warm. Treble was the conundrum… the Trio has (1) Tia driver while the Sultan has (2) electrostatic drivers for treble. Keeping this in mind, I kept drawing the same conclusion, the Trio puts out the more detailed yet softer / airier treble. I can’t say I am surprised though, the Trio is the most underrated IEM in the 64 Audio line-up. Often being less hyped than the world-class reference of the u12t and overshadowed by the fourte, the Trio just sits in this IEM purgatory.

After spending time with the Sultan, I appreciated its technical ability and overall sound. It is a respectable product that I doubt anyone would be genuinely unhappy with. That is until you slapped in a pair of more comfortable, lighter, and cheaper, 64 Audio Tia Trio and grimaced. Being completely transparent, after hearing the similarities on the vivid, I was testing the Sultan ($4,160 as configured with vivid) vs. Trio (1,839 as configured without vivid). So that means not only did I give the Sultan the best chance at sounding better, I gave the Trio the worst… yet the Trio did not sound handicapped at all. Either the Trio stock cable is underrated or the Trio is underrated but in either case, that’s a win for the consumer.

After hearing just how much more resolving, spacious, and technical the Odin was, I felt a bit of disappointment at the price tier of Sultan. Despite that, I continued on with complete neutrality… then hearing the Trio go 12 rounds and win by a split decision, the Sultan lost a bit more appeal. In conclusion, the Sultan is a decent sounding IEM but not one I can recommend at its current price point. If you can snag it second hand sure, but $2,900… as they said in the Wizard of Oz, “Not no way, Not no how.”

If you want to blow a wad of cash to get an actual top of the line technical performance and sublime sound, get an Empire Ears Odin. You can find the Odin review HERE

Want much of the Sultans performance with more resolving treble, go 64 Audio Trio.