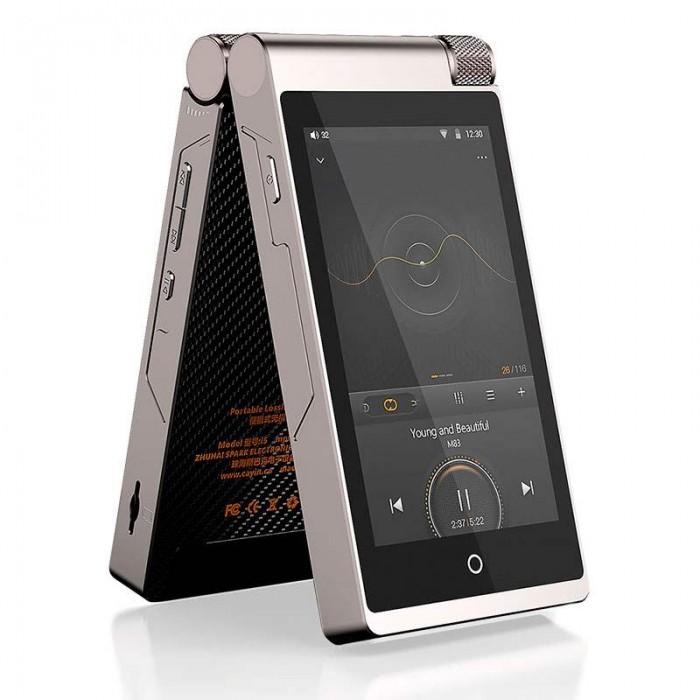 From the company that brought you the N5 and N6 sources comes the Cayin i5. The i5 is their entry into the very competitve mid priced DAP market. Cayin also has other lines of audio equipment and is no stranger to the members of HeadFi. The focus of the review is the Cayin i5 DAP in conjunction with the HIBy music player. 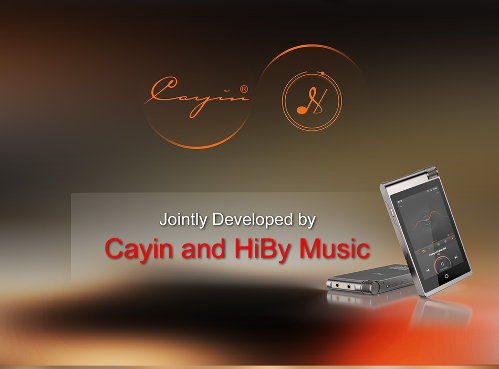 My unit was purchased from MusicTeck. I would whole heartedly recommend reaching out to MusicTeck. Andrew is a great guy and so easy to deal with. He has a line of quality products and is expanding his line so be on the look out.

I am not going to write an extensively long detailed review or a series of unboxing photos. There are plenty of unboxing’s out there just do a search if you want that. There are also some very comprehensive reviews available currently on HeadFi I would encourage you to read them. I think this device is a mixed bag of joy and frustration and  I would rather highlight my real world, daily use experience with the device rather than make this a science project review.

I will begin by saying that my experience with a variety of sources has not been as extensive as my headphone list. The standard I hold all DAP’s to is the AK120ii. For me, owning the Pono player and using that in balanced mode was the bar that all DAP’s needed to raise. Upon first listen, the AK100ii player was an instant upgrade in sound quality and GUI, a great DAP experience compared to the PONO. If I had a criticism of the incredible AK player it would be the power always left me wanting for more. If you want quality you have to pay for it, but anyone on HeadFi knows there are those occasional jewels that you find that perform at a higher level than their price, an example that comes to mind are the Meze 99 Classics. AK players aren’t cheap but they do deliver a nice user experience.

Some of the other sources I have owned include;

I reached a point where I was going to stop purchasing more equipment and utilize what ever cellphone I had for streaming. I was ready to stop my endless search for the Holy Grail of sound nirvana. If I was only going to stream I certainly wouldn’t need a DAP so I sold my AK120ii in a momentary lapse of reason, to this day I don’t know what I was thinking. I started to use my Pixel XL as my source streaming Amazon Music and Tidal. Those that have followed my thread posts or reviews know I am not into the desktop gear and being tethered to a chair does not appeal to me, I need portability. While portability does provide some power challenges when driving a headphone such as the HD650, it can be accomplished. Streaming using only my cellphone as my sole source left me feeling unsatisfied, not to mention I have a 256GB micro sd card stocked with some prime FLAC music just sitting here idle and I couldn’t power my HD650. I wasn’t ready to buy another DAP at the top tier price point yet so I was looking for a mid price point DAP($500 or less) that seemed to check a lot of boxes and was reviewed to have good sound quality. The Cayin i5 had received many accolades in 2016 so I figured I would give it a test drive. 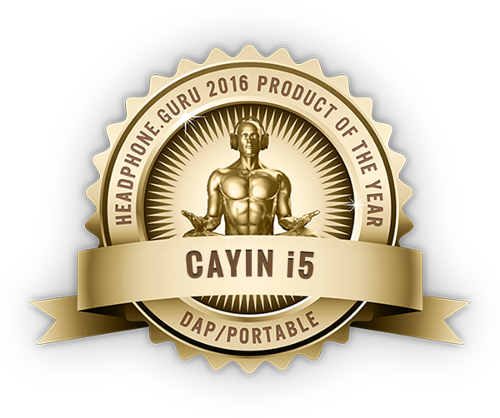 Inside the box there is a cable and an included micro to USB-C adapter (edit). There are front and back screen protectors, the i5 unit and an owner’s manual. There is no protective case, most of the reviewers were part of a tour and they were sent a case along with the unit so if you see a case in most of the reviews that is why.

I will say that upon first glance of the unit you can immediately see that the unit is a well built and sexy design. From it’s large volume knob to it’s screen size it is well thought out. Once you hold it in your hand you realize this thing is built like a tank and it is heavy, very substantial. I think the feel in the hand is really a plus as you never feel it is the least bit fragile. Let’s discuss the volume knob for a second. It may sound strange but it is an awesome volume knob. It is the volume knob that all other volume knob’s should aspire to be when they grow up. It has great control and you actually have to want to turn knob, no accidental turning, one volume step at a time with no additional play in the knob. One of the things that some did complain about with the AK 120ii player was too much play in the volume control. Volume knob = a 10 on the volume knob scale.

The following IEM’s and Headphones were used during this review:

I think the best way to give the consumer the information on this player from the good, the bad and the ugly perspective is to use bullet points to highlight why it is worthy to consider and what will annoy the hell out of you. 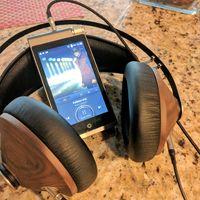 Power – It actually powered my HD650 with authority and bass presence; I am so impressed with the power of this unit. The most powerful DAP I have used and in a good way.

Build Quality/Looks – Solid, well thought out, not fragile and I think the design is sexy, beautiful

Sound Quality – You will see this in The Good and the Bad. It takes brain burn–in to actually get past it’s warm delivery. Once you devote some time the details start to shine through it’s initial thick delivery. I enjoyed it after I spent the time with this DAP it deserves. Good size sound stage.

Streaming – TIDAL streams on this unit. It is a plus you can stream TIDAL but everything else about the TIDAL experience on the i5 is part of The Ugly.

USB DAC – The unit can be used as a USB DAC

Firmware 2.0 – A great step in the right direction(upon writing this it appears 2.2 was released)

GUI – Fairly simple to learn and navigate, and it had all of the options I wanted, but it has it’s quirks and frustrations

Hardware Buttons – Right side play/pause and skip track buttons and it doesn’t require the screen to be on.

The Bad and Ugly:

Sound Quality – The warm initial listen. The initial listen may turn some off. The warmth is definitely how the majority of reviewers will describe the Cayin i5 and rightfully so. I am just not sure the majority spent enough time to appreciate the sound quality. Warm compared to an AK 100ii or 120ii.

Storage Space – Only one micro SD slot and only 32 GB on board. If you are going to only put enough internal space for the OS and a few files then offer two storage slots.

Features – I think the unit tries to offer too many features from Wi-Fi to Bluetooth and infinity. It is fine to have features but make sure the basics are delivered first. Ie… more storage, newer version of Android, OTA update that works.

Streaming – If you are going to advertise the unit with Google Play store and downloading and streaming apps make sure they work huh! TIDAL is a complete joke on this unit. Whether it is the fact that the app on the Play Store is designed for a newer version of Android or the i5 just doesn’t have the processing power to stream TIDAL seamlessly, whatever the reason it skips, stutters and just isn’t enjoyable.

Battery Drain – The i5 has a tendency to drain the battery while in sleep mode. This really needs to be fixed because it isn’t a trickle it is a drain.

No Balanced Output – No balanced output 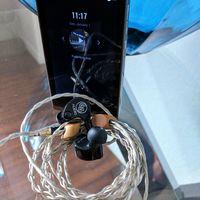 Thoughts on the Sound:

The sound is thick, warm and like a friendly blanket in the winter, it covers you with a comfy sense of peace. It truly is an amazing sound. Soundstage is wide and the music lays out in front of you with a smooth ease. When using the 64 Audio U12 the initial sound was too warm but as I had more time with the unit it really became organic and natural sounding with the U12. The power to drive the HD650 is very impressive as it drove them with force and bass presence. Treble was never sibilant or harsh with the HD650 or any headphone I used. I found a friend with this DAP and it’s inviting sound signature. Details will shine through but the details are infused into the smoothness of the signature of the i5, another reason it provides an effortless listening experience. Anyone with the Meze 99 Classics needs to pay close attention. Even though the Meze have a warm tilt to their sound signature the pairing with the Cayin i5 is incredible they truly pair as if they we made for one another. The sound conjures dreams of listening  to some Sade with a fine Scotch and a Cohiba accompaniment. 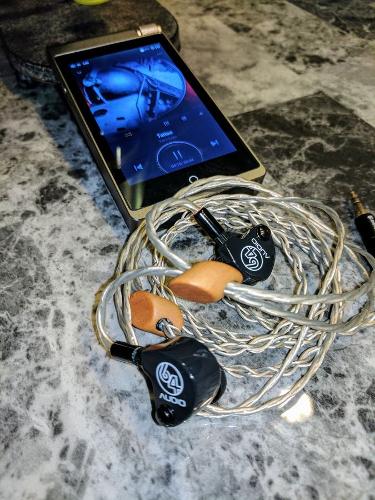 Now that it appears I totally trashed this DAP and left you wondering why you would ever want to buy an i5 let me be fair. The sound quality is really worth every penny. I was disappointed that the Cayin i5 had many niggles in it’s software and functions, most I feel all can be fixed with firmware updates. In my experience it appears many of the DAP’s released today release with some issues, uh oh I feel a rant coming on. I wish the i5 would have focused more on what should be the price of admission in the DAP market today. Check all of the boxes needed to differentiate a DAP and it’s features from the features that consumers have readily available from their cellphones and deliver a musical experience with plenty of storage, internal or external, seamless GUI. There are really good audio cellphones available today, the HTC10 and LG V20 come to mind, which are convenient for the individual only wishing to carry one device. Stop releasing half baked equipment and test it fully and be diligent in monitoring your customer’s feedback for that device and stop worrying about your next release. The rush to get items to market is frustrating to consumers. We are willing to spend our hard earned cash but we want what we pay for and don’t want to feel as we are the beta testers for your equipment.

Even the larger companies, Samsung comes to mind, are guilty of inadequate testing. The Note 7 is a fine example of this. It had every feature possible in a cellphone and it was a wonderful piece of technology but at the end of the day no one wants to carry a fire hazard in their pocket,(end rant).

If I didn’t have the Opus #2 I would be happy with the i5 from the pure musicality of the device. It’s sound stands above many others in this cluttered mid tier lineup of DAP’s. If someone is looking for a smooth non-fatiguing, powerful well built DAP this could be the one to get. I would strongly encourage you to visit the Cayin i5 thread to see if the annoyances are being ironed out. With all of the little issues I would still recommend this DAP based on the primary reason we purchase a DAP in the first place…it’s sound.