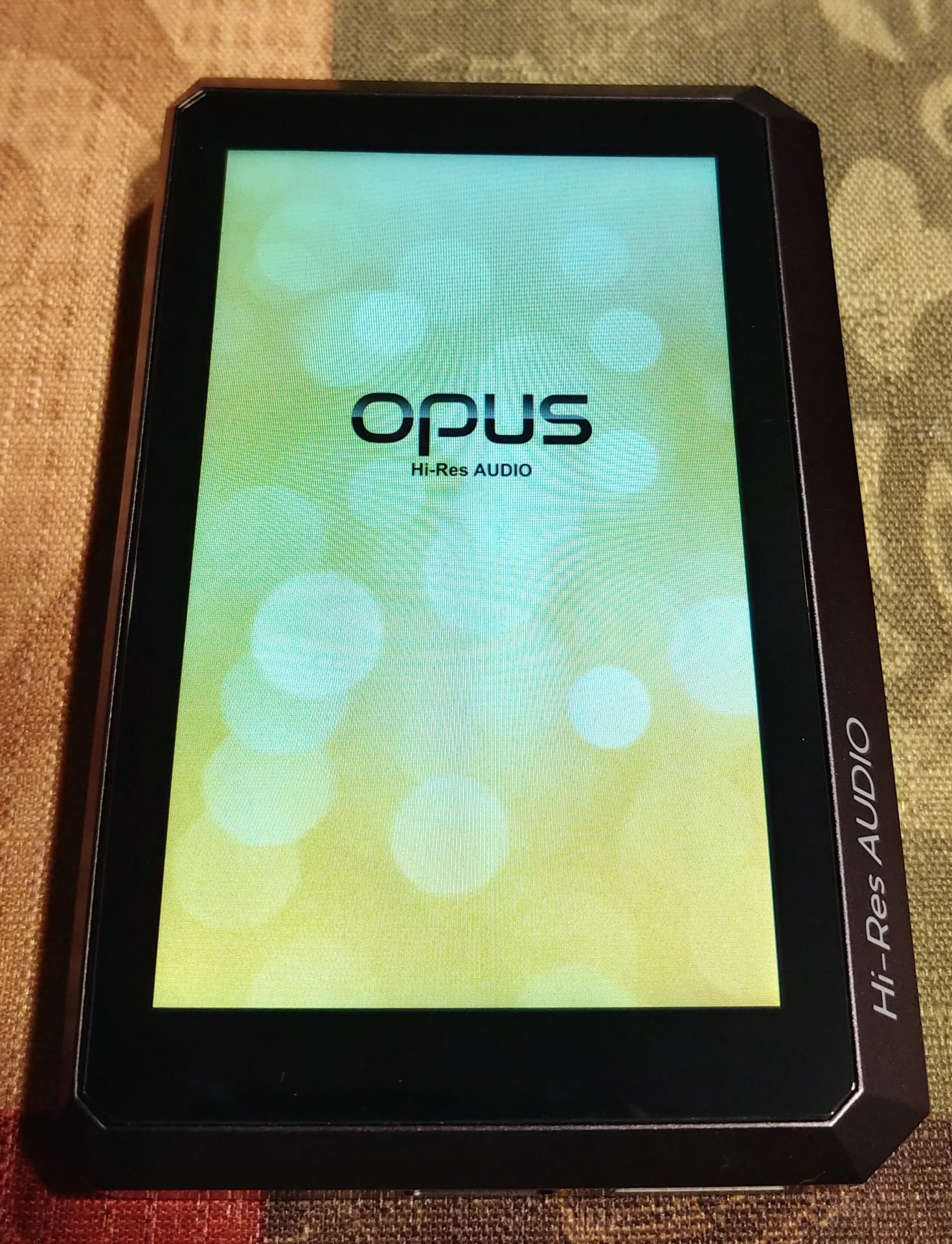 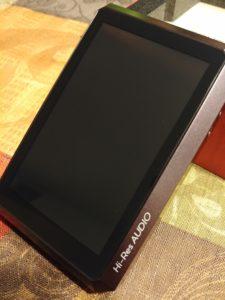 The Opus#1S is the second generation of their successful and budget conscious Opus#1. I never had the pleasure to hear the Opus#1.  I jumped straight to their TOTL Opus#2 which became my state of the art reference DAP.  I read so many positive comments about the Opus#1 that when the opportunity was presented to me to review the Opus#1S, I seized the opportunity.  Upon opening the packaging and beholding the player I was immediately struck by the rich burgundy color, it exuded quality. I have recently reviewed DAP’s that focused on clarity and transparency and based on the Opus#1 comments I was sort of expecting a neutralish, balanced sound, instead, on first listen I was presented with a lush, rich and full sound. The richness does not detract from the details, but the overall aura is rich and full.

For the most part the overall experience with the Opus#1S has been positive. If someone already owns the Opus#1 should they pay the upgraded price for a 1S? I can’t answer that question, but I will lay out a brief overview that hopefully helps you make that decision.

In this area, a picture is worth a thousand words so I will include photos to show you what is included with the 1S. 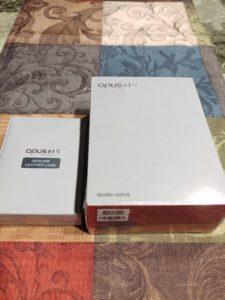 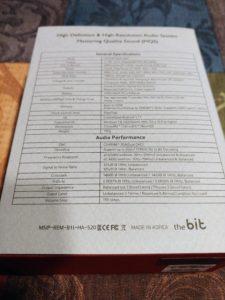 The sleeve on the outside of the box is gray with the name Opus#1S on the top and audio-opus on the bottom. The back side includes a full spec sheet, which is fairly thorough for the outside of a box. Under the sleeve is a brick red box. 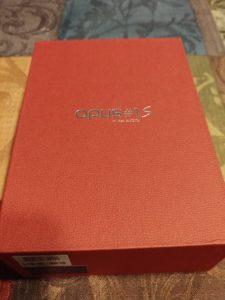 Inside the brick red box is a foam cutout which holds the Opus#1S user information, screen protectors and a USB cable. As usual, with many of the DAP’s recently there is no protection. I seem to mention in all of my reviews that a case is such a nice touch to offer. I believe even a cheap case to at least protect the unit, while you decide on the right case for you, would be an incredibly welcome addition. 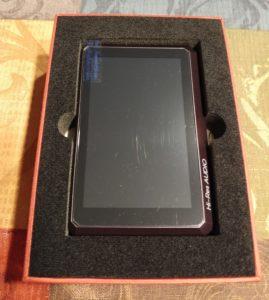 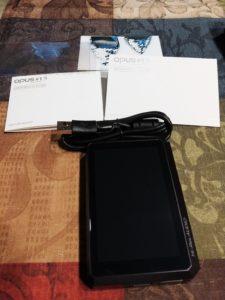 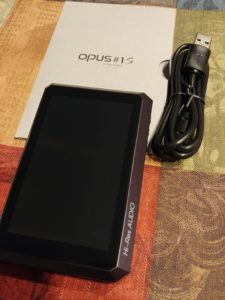 The case I have is real leather and made by Dignis. It fits snugly and provides access to the usb port on the bottom and markings on the sides so you can see and feel the forward and back buttons or adjust the volume. The case was fabricated perfectly to showcase the design and lines of the DAP. For me, a case is a must have and this case is really nice, at $40 is a bit expensive, but worth it. 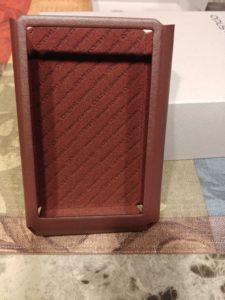 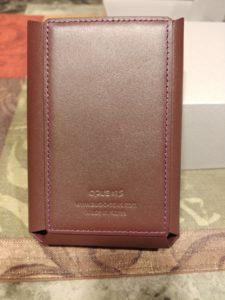 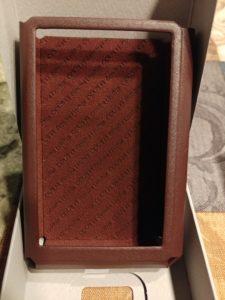 As mentioned above, the Opus#1S is a very classy looking device. Upon reading, it is my understanding that the dimensions are equal to the 1st generation Opus#1. Which would mean if you had the Opus#1 you would be able to use the case you already have for that device. If it is important to be stylistic then you may want to accessorize with a matching color because the original was released in a gunmetal or a gold color. The Opus #1S comes in blue or purple ABS plastic. As previously mentioned the unit I have is in purple, not in the same shade of purple as Barney, that big stupid kid’s show dinosaur, or even the NFL team Vikings for that matter, it is a deep wine color that looks very rich and classy. 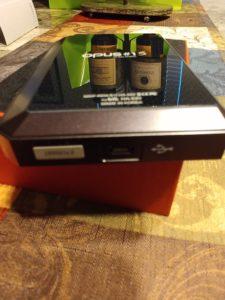 The dimensions are 72mm (W), 112mm (H), 18mm (D) and weighs in at 190g, matching the Opus#1. There is 32GB of internal memory.  External memory allows for two MicroSD (Max 256GB) formatted in exFAT, NTFS. Having two MicroSD slots is nice as I have two 256gb cards I use, which gives me my entire collection and space to add more music. It has a pretty good battery life and is rated at 11hours of play time and of course, YMMV, but I found the battery to be more than adequate. 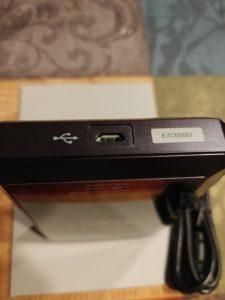 The Opus#1S has a 3.5mm / Optical Out (3.5mm) and Balanced Out 2.5mm, 4-pole support. This unit has some very impressive output power through its balanced port at 3.4 Vrms and SE 3.1 Vrms. Included is also an upgraded Cirrus Logic dual DAC, CS43198 while the Opus#1 had a CS4398. The specs have been upgraded on the 1S when compared to the Opus#1. The sound has a very black background and I did not detect any hissing. 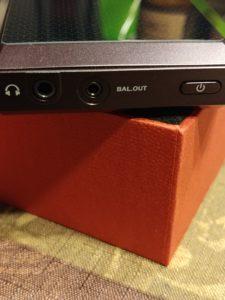 The screen of the 1S appears to have had a slight upgrade to the original. It has a TFT touch screen, which is the same, however this is an IPS panel and I can tell you the colors have great depth and a rich visual appeal. 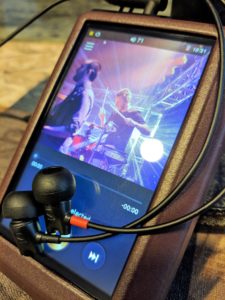 The left side of the device has volume up and down controls and on the bottom of the device is the space for the dual MicroSD cards. The bottom of the Opus#1S has a USB-C slot to be used for charging as well as data transfer. The top of the unit has a 3.5mm headphone jack and a 2.5mm balanced output as well as the power on and off switch. The right side of the DAP has back/forward buttons and also the play/pause button. 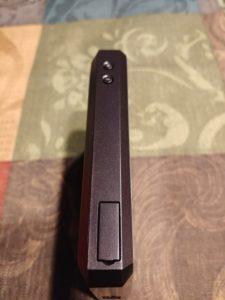 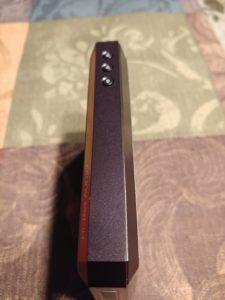 The Opus#1S is a music player in the raw sense and doesn’t have a lot of additional features that other DAP’s have, such as Bluetooth and WIFI. 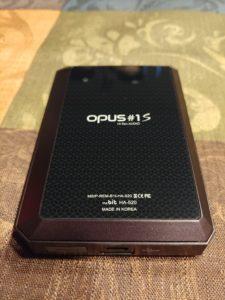 Having the Opus#2 I was already very familiar with the UI. One of the differences between the 1S and the Opus#1 is, it is not necessary to select balanced as an option, just plug a headphone into the balanced output and it is activated. If you have any of the other of the Opus line you will be very familiar with the UI of the Opus#1S. I will include some photos so you can get the idea of how it visually appears. I will say that A&K and Opus have the most polished UI’s I have encountered. 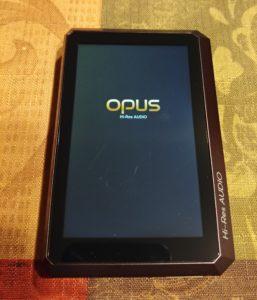 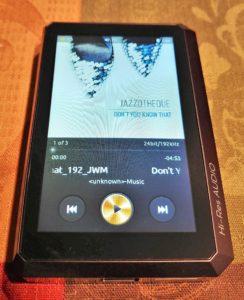 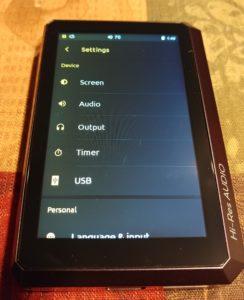 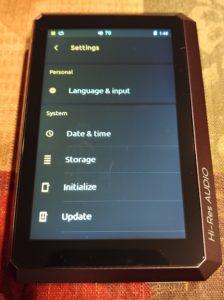 Moving on to the sound:

A two-word description of the signature of the Opus#1S would be rich and full. It has a black background that is clean across the spectrum, but yet it is so full, so dynamic in its presentation. The soundstage is wide and there is plenty of separation between instruments. To my ears, the stereo separation is actually quite impressive.

Most times I prefer any warmth or color to be added by my IEM’s or headphones not by my source, but in the case of the Opus#1S it is deliciously toned, a tone that engages the listener. The signature reveals details, particularly true with higher bitrate FLAC files, but it is never fatiguing because it is not an analytical sound that bombards you with detail, it is a sexy, powerful sound. The bass response has a wonderful impact as the DAP reveals its masculinity.  The bass never bleeds into the other frequencies so there is no muddiness that occurs frequently with warmer signature devices.

Generally speaking, a rich, robust signature, such as this would better lend itself to brighter or thinner sounding IEM’s or headphones, but magically the Opus#1S seems to do well with all signatures and I enjoyed it with all of the IEM’s and headphones that I plugged into the DAP.

How does this DAP stack up to some of the other DAP’s in my possession? 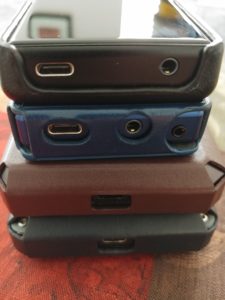 In comparison to the M2s ($199) I would say that the overall tone is a little similar in that it is a warmer signature, but that is where the similarities end. The Opus#1S has a wider soundstage and is not congested where the M2s is narrower and claustrophobic, by comparison.  The power output of the 1S is impressive compared to the M2s. Overall, the 1S gets the nod. Maybe it is not a fair comparison, but I did find the pairing of the M2s was pretty sublime with the EarSonics EM10, and I still feel that way. 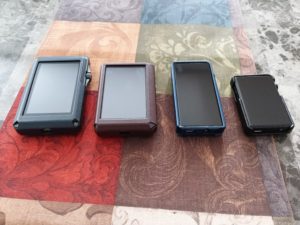 The LGV30 ($800 but easily found for $500) when forced into aux mode has a clearer, more transparent signature, with less warmth. To have the same level of power you have with the 1S it is necessary to force the V30 into aux or high impedance mode. The stage is equal with the 1S having a greater separation of instruments.

Differences between the Opus #1S and Shanling M3s are obvious. The #1S is more of a warmish tone, with a rich, full texture. The M3s is more transparent and has a touch more clarity. Not to say the Opus#1s is not clear, because the details are certainly evident. The stage is wide in both and I would consider both winners in this area. The treble extends further in the M3s and has an overall brighter signature. Both are powerful units and I would actually call it a draw. When deciding between these two DAP’s the choice is transparency and clarity over tone.  If you are looking for a less colored signature the M3s would be the choice but I prefer the signature of the Opus, mind you, that is my preference, but either player is a fine choice. 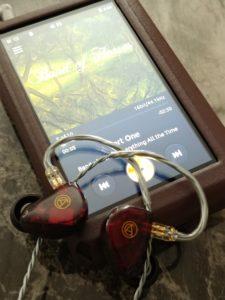 As far as pairing of IEM’s and headphones I found zero that paired poorly with the Opus#1S.

My favorite pairings I currently have would be with IE800s and the Custom Art FIBAE 3. The DD of the IE800s has become one of my favorite signatures and the Opus#1S blends so well. The DD bass of the IE800S delivers the goods, and the overall warmth of the of the Opus does not overload the bass levels or cause any congestion. The FIBAE 3 is a clarity monster and the synergy between the two is awesome. The F3 treble tuning aids the extension that the Opus#1S delivers. There are times where two pieces of gear really assist one another in delivering a perfect sound and pairing, the F3 and 1S are one of those relationships, awesome synergy. 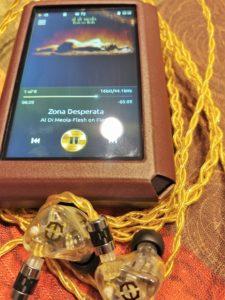 I sampled the Opus#1S with the Sennheiser HD 6XX and the Meze Neo and both were easily driven and portrayed the sound as it was meant to be portrayed. I was pleased, but not surprised that the Opus#1S was able to drive the HD6XX with ease and showcased its tried and tested signature flawlessly. 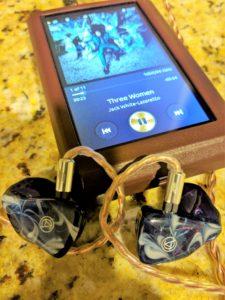 I became infatuated with thebit and Opus when I purchased the Opus#2. It has become my reference DAP for my listening and reviews. The Opus#1S is more of a budget minded DAP without the features that many DAP’s have, even at equal price points. It is a music playing machine with just enough features to support the DAP in doing what it was designed to do, play quality sounding tunes and make it user friendly.

The build is plastic, but it does not feel cheaply made as it is high quality ABS. The design is classy and I love the purple color, it is a rich and deep as the sound that it produces.

The UI is without gremlins and is, from my experience, on par with the A&K UI which is one of the best.

The DAP has a rich, full and smooth delivery with lots of power, especially from the balanced output and was able to drive the HD6XX on the SE output.

Having never heard the original Opus#1, I obviously can’t compare, but based solely on my experience with the Opus#1S I can totally recommend it. If you are not in the need of WIFI or Bluetooth and want a powerful, great sounding DAP, this is the one. 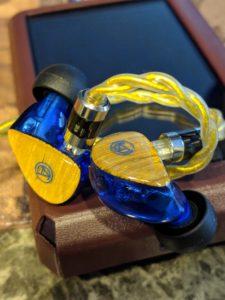