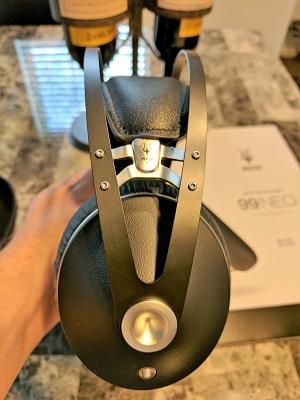 I want to thank the Meze Team for supplying me with the 99 Neo. Lorand was communicative and an overall great guy to deal with. I have found their customer service to be top notch.

Anyone that has been on Head-Fi for the past year knows that a company named Meze made quite a splash in the Head-Fi world. With the release of their 99 Classics they received people’s attention and review accolades.

Anyone that has followed any of my reviews knows that I swing towards the portable side of things. While the 99 Classics checked many of the boxes it needed, to be considered a true portable device there were a couple of my own personal boxes that they didn’t check.

1) That entire headband contraption 2) They were a little too ritzy, gaudy looking for me, golden adornments and all.

I ordered the 99 Classics when they were first released and honestly, they didn’t stay long in my collection. I couldn’t get past the ornate gold accent look, it was okay, I would only wear them around my house. Certainly, not out exercising or walking my dog around the neighborhood for our daily hour long walks. Also, I live in Florida and we have a lot of lightning strikes and the whole lightning rod on top of my head just doesn’t cut it. That said I do have closed back headphones that aren’t portable and never leave the house, I will place the Meze on that same non-portable shelf. If you don’t mind the styling of the Meze they could be considered portable and are well driven from a portable device. If I worked in an office I would clearly use these as my work headphones, that said I can’t use headphones at work.

The other thing I didn’t like was that the pads were thin, shallow and too uncomfortable for longer listening sessions. So, I returned them and checked the Meze off of my list. Been there and done that.

Thankfully, as I generally do, I was scanning Head-Fi for something new to check out and I ventured into the Meze thread. They mentioned new styling and the fact that they were shipping with a new larger pad. I took the plunge for a second time on a Black Friday offering and ordered a silver trimmed pair also making sure they had the new pads. WOW it is now one of my favorite headphone purchases. They truly do perform above their price range and are a terrific closed back headphone, especially at $309.

This review however is about their new younger brother, the 99 Neo. 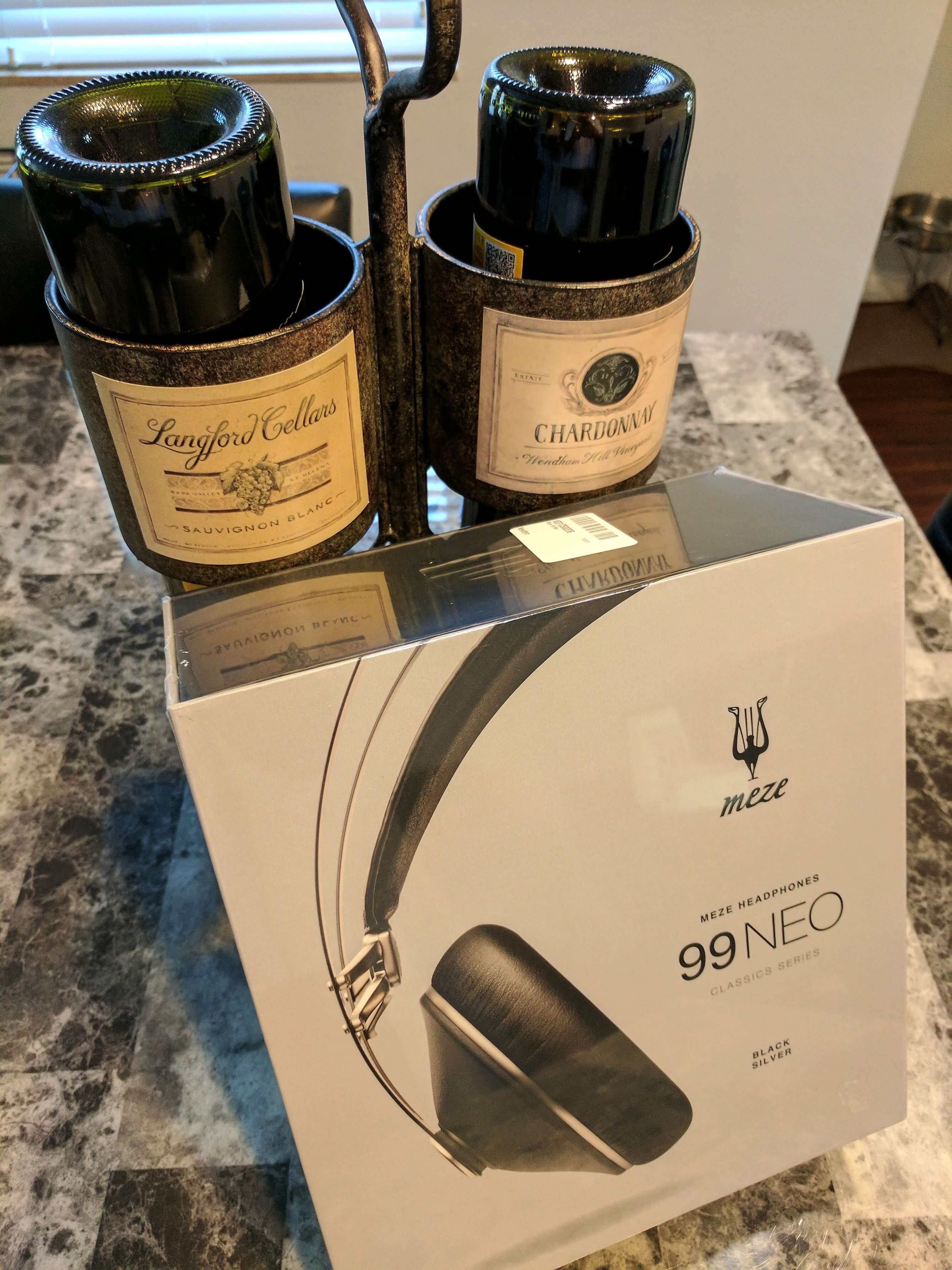 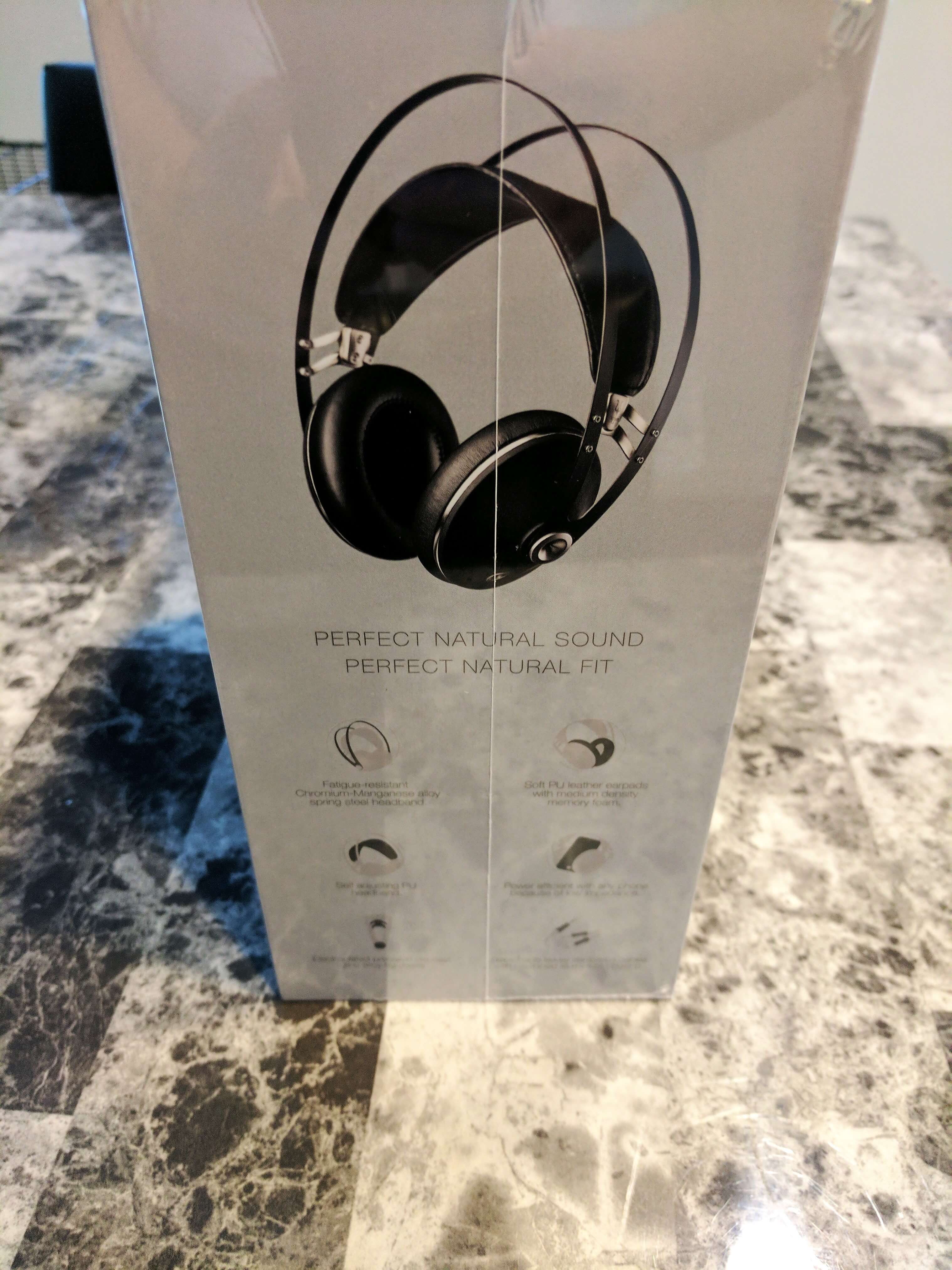 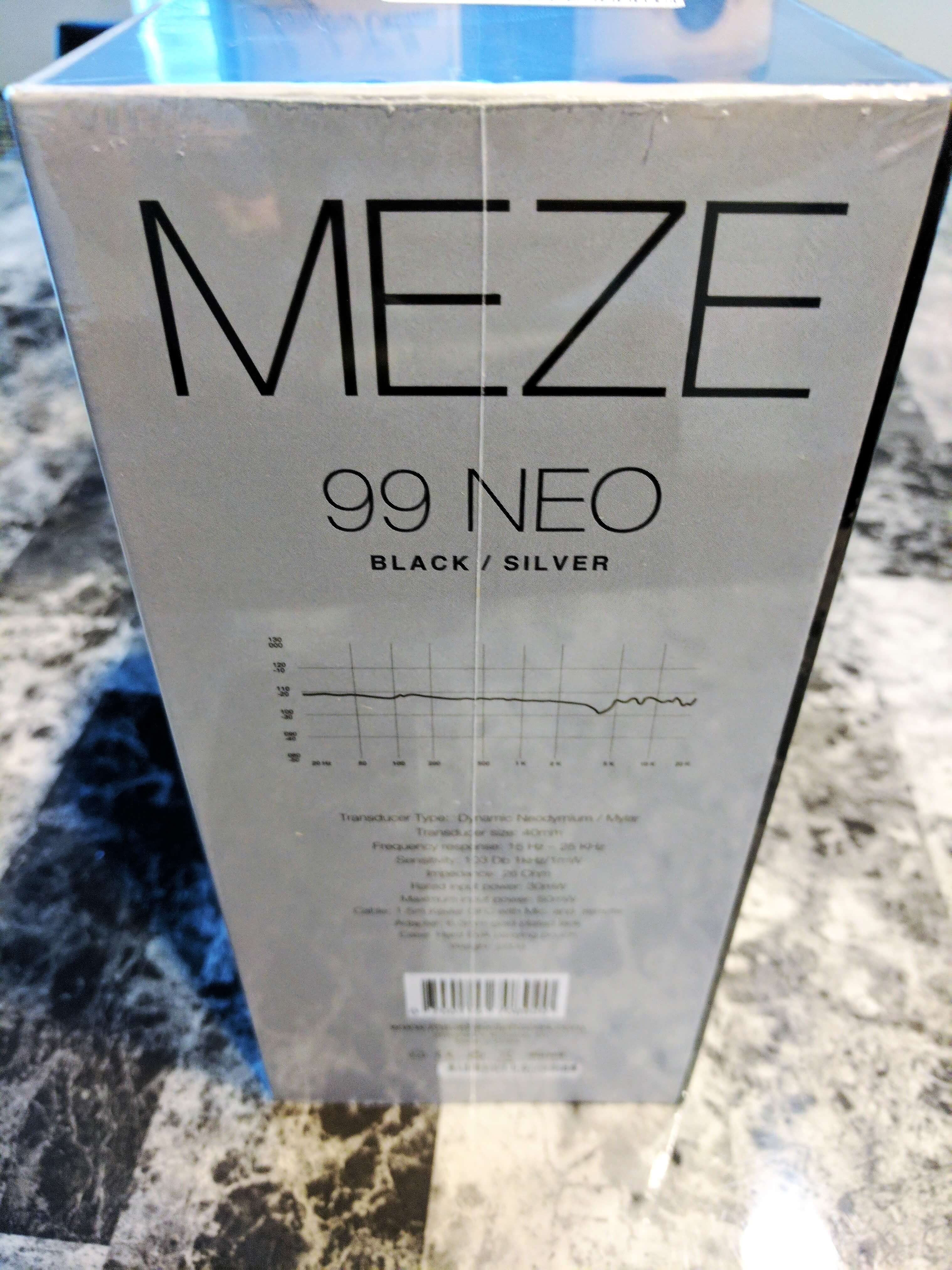 I won’t do a boring unboxing but I wanted to show you the packaging as I like their marketing. It is plain, yet modernly, hip and kind of says “Buy Me”. At the end of the day it is a freakin’ box…move along nothing to see here. 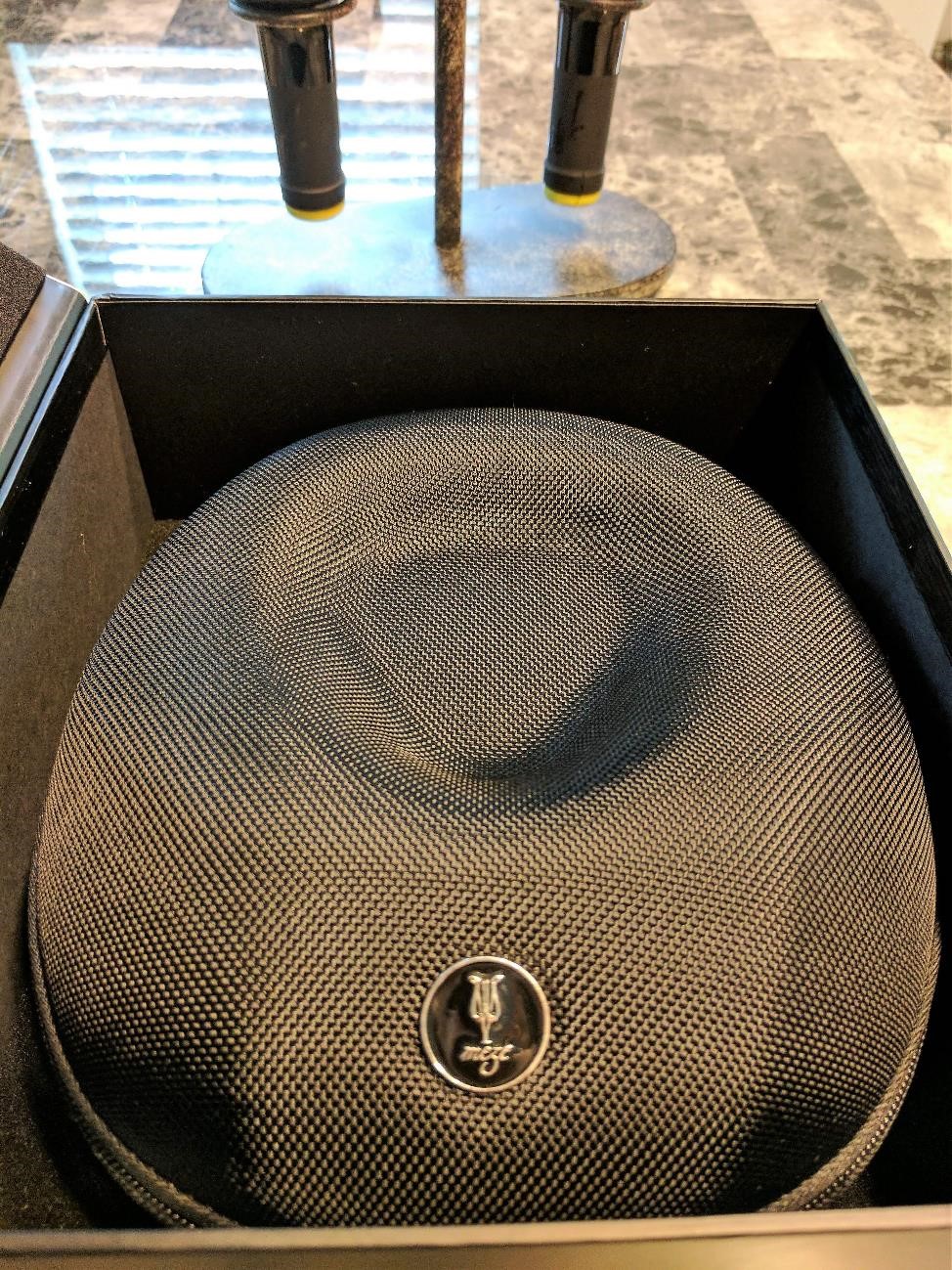 The case is nice, the outside is nylon covered, unlike the 99 Classics, and inside has space for the 99 Neo (without cable attached, kinda sucks) and a round storage thingie for your cables and the included adapters. The case is slightly different than their previous case but there was no reason for a major redesign. I appreciate the inclusion of a case with my purchase and do like it’s styling. Great job!

Other noteworthy things to discuss are the fact that the cable has been slightly modified, compared to the original 99 Classics release. My Black Friday model 99 Classics have the new cable so the change is not new to me but it could be to you. The difference between the old and new cables is that the old cable had a cloth covering the entire cable and now above the Y-split it is rubber. I guess it is an attempt to cut out cable microfonics. The lower portion, beneath the Y-split is still cloth wrapped. 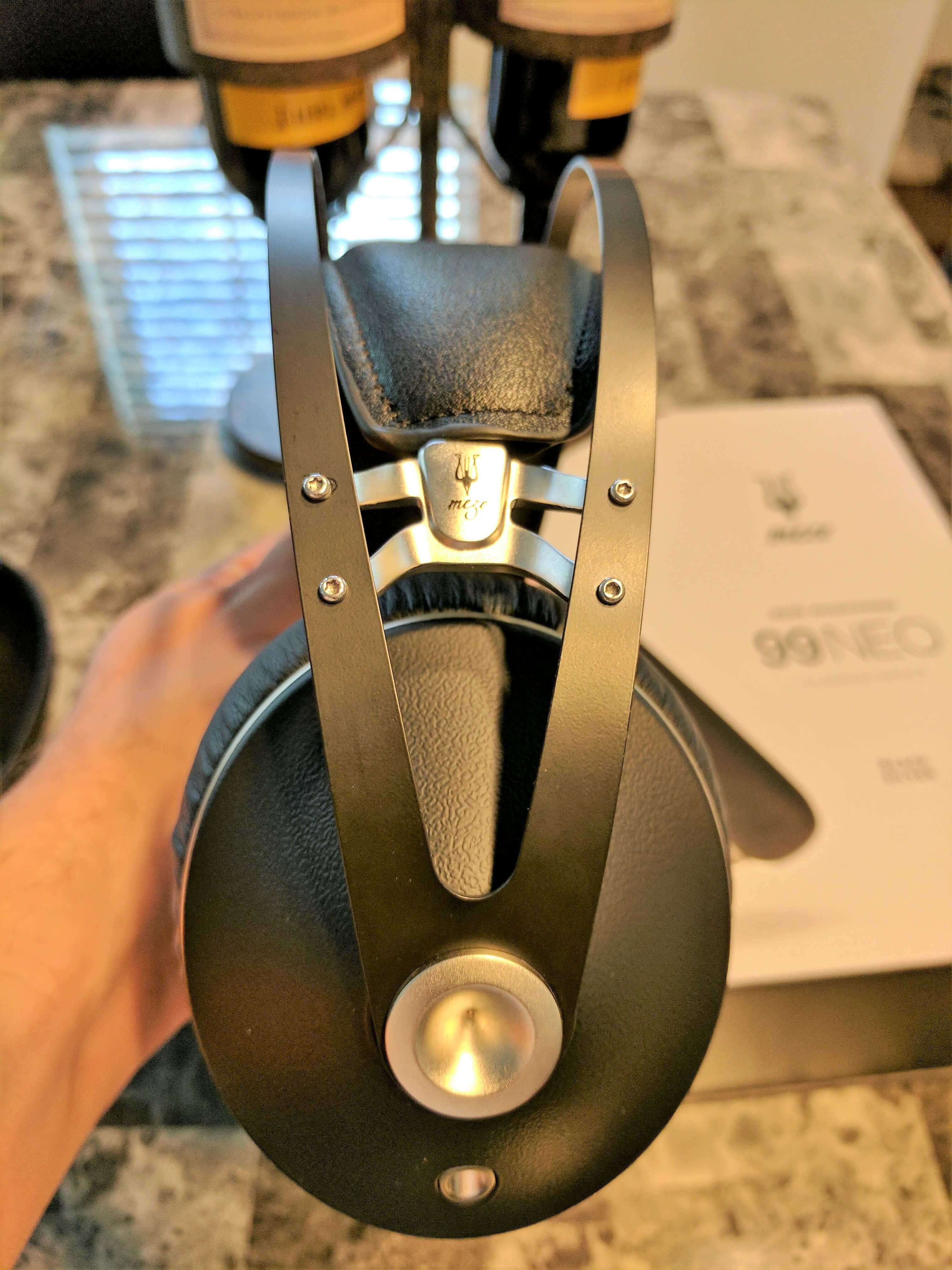 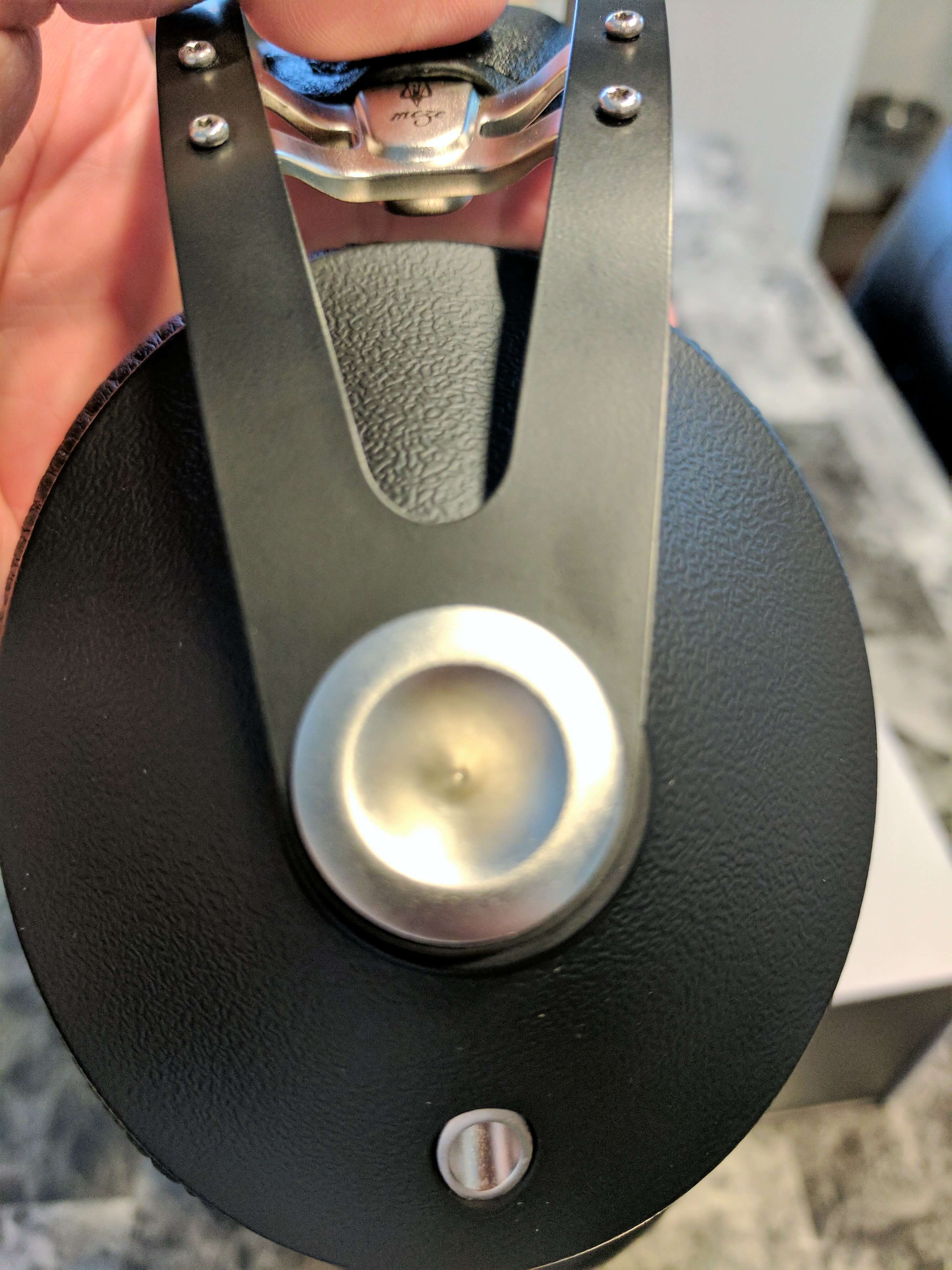 The basic external design is the same sans the beautiful wooden cups. The cups have been replaced by ABS plastic. It is a black cup with some pebbling texture. I like the Neo styling more than the 99 Classics as they adorned the new cup with silver accents. To my eyes, a little less gaudy and flashy and more utilitarian and muted than the 99 Classics. I also noticed that there appears to be a new ear pad used on the 99 Neo even though the “new” one for the 99 Classics haven’t been around all that long. Hmm… I was a little curious about this change especially after Tyll was not to kind to say the least regarding the new pads and the effect on the Neo’s sound signature. New plastic cups and a different pad I need to hear this for myself and compare it to its older brother. 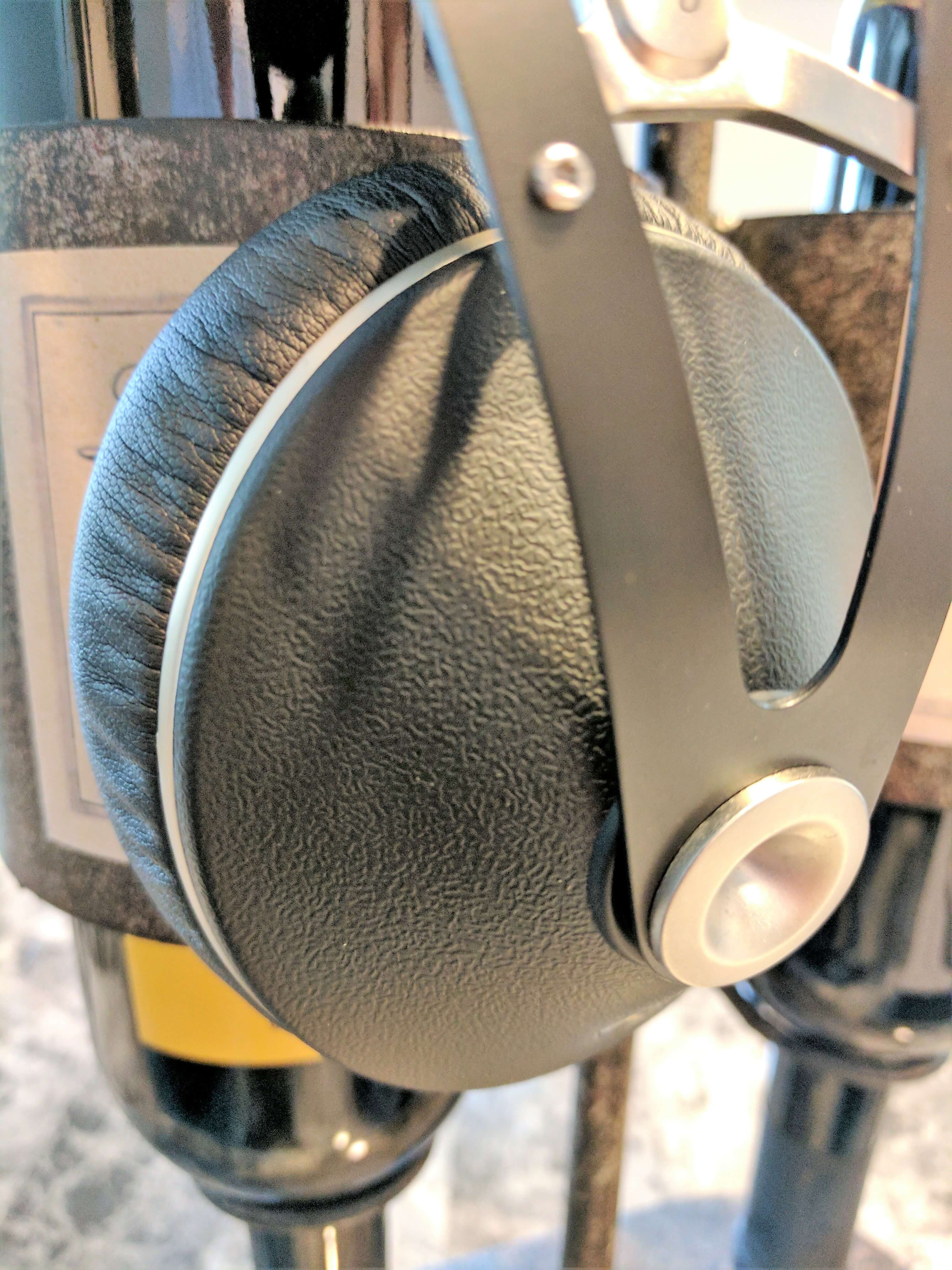 Let’s get right to it…SOUND

OH SNAP!!! To hell with tact …these freaking things have bass. Not just bass, a warm hot mess of bass. Bass splashing its bassy color all through my head. Bassgasm! Did I mention they are bassy?

I know I have painted a picture that might have described Beats, pre Apple, but not so fast there mister, patience.

When the 99 Neo were sent to me I was asked to do a proper burn-in of 48 hours of pink noise, being the compliant dude that I am I proceeded to set my DAP and pink noise file on repeat and left it alone to do its thing. The 99 Classics also benefited from a proper burn-in period so what the hell, I’m game. 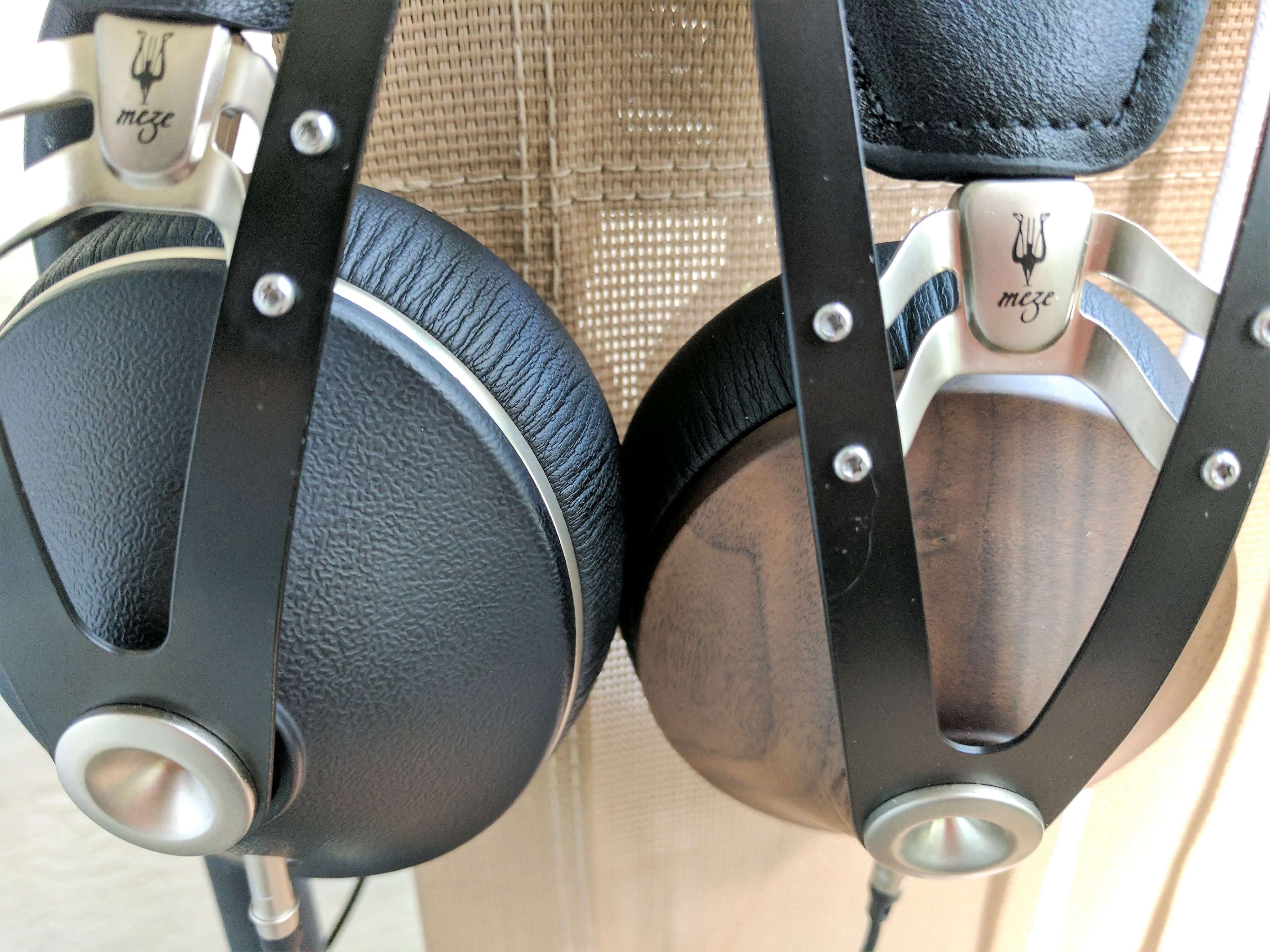 After the burn-in period I returned to a wonderfully warm, thick enjoyable sound signature. I enjoy a warmish tone to my headphones but the initial listen caught me by surprise. Since I did not write a proper review of the Meze 99 Classics I will throw out a couple of thoughts to give you a bit of a comparison to the 99 Neo. The 99 Classics have a warm tone, with a slight bass focus but the details show through with a nice treble extension, never harsh or sharp. The treble in the 99 Classics provides a bit more air around the notes.

With patience waht can you expect from the 99 Neo compared to the 99 Classics? The sound of the Neo is warm, thick and bassy. After burn-in the treble shines through and provides more top end sparkle. They are not as detailed as the 99 Classics and I don’t feel the soundstage is quite on the same level as the Classics but really, surprisingly, it isn’t that far off. There is some nice layering in the overall sound and vocals have a force that is warm and soothing. I am not sure how Meze has done this. In my experience a sound this full and thick is usually a jumbled ball of mess appearing in the middle. The 99 Neo truly shatters that pre-conceived notion.

If I could sum up my feelings about the 99 Neo in a sentence it would be the sound presents itself as if the ear cup is cavernous, deep, and never ending, and I LIKE IT. It truly is a badass, powerful can.

I used both the Samsung S8+ and the Opus #2 for a comparison of sound and both were capable of driving the 99 Neo with authority. It probably goes without saying that the Opus #2 was my favorite pairing because of its pleasant sonics. but the S8+ and Poweramp beta utilizing 24-bit output sounds damn good as well. 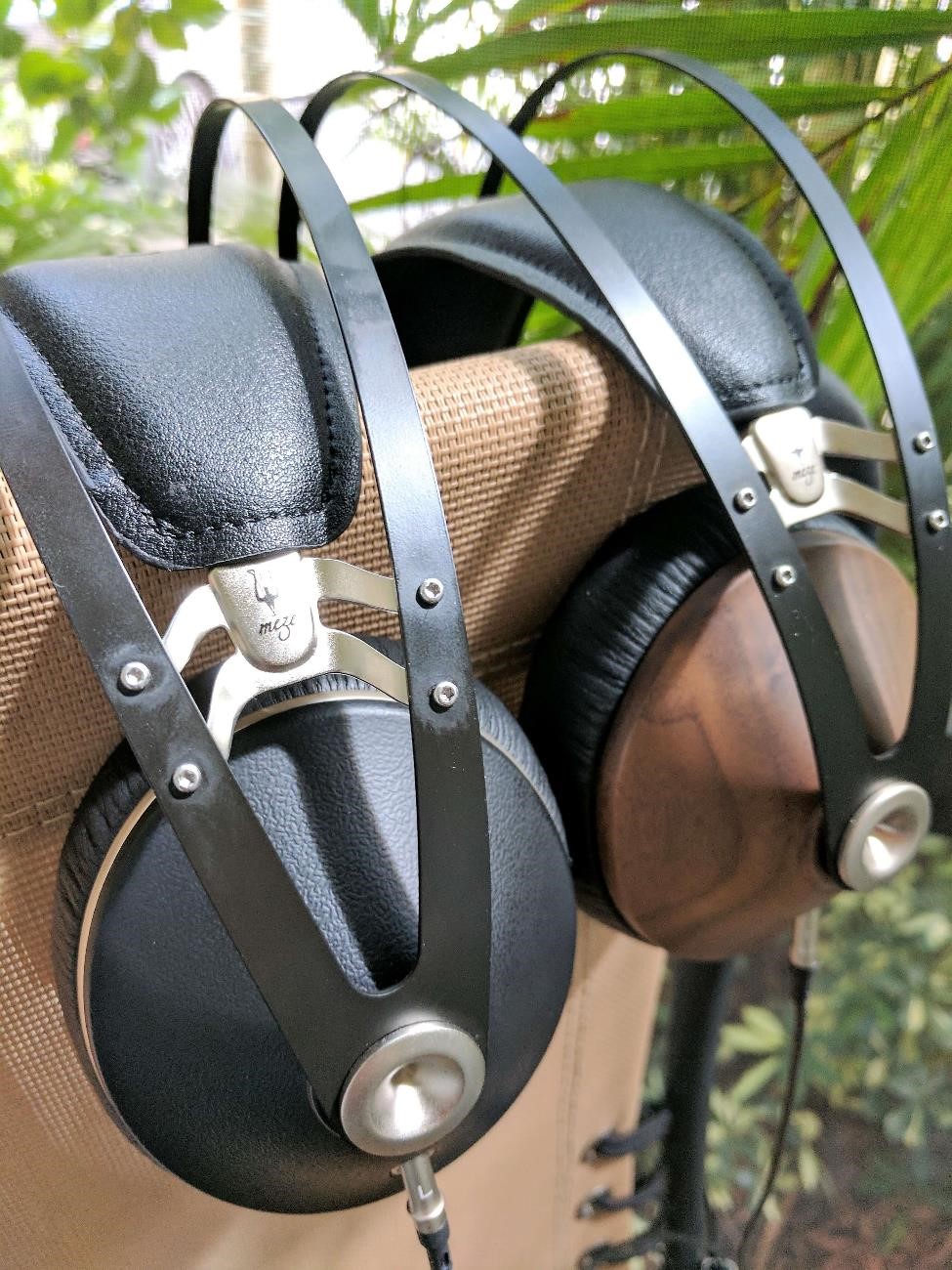 With the differences between both of the Meze headphone offerings came some questions. I asked the Meze Team what their thoughts were behind the 99 Neo and Lorand from the Meze Team was kind enough to sum it up.

The dialogue is below:

“As I prepare to begin to write my review would you mind giving me Meze’s thoughts on the tuning vs. 99 Classics. There are some real differences, was it purposeful or is the difference in plastic cups or what?”

“There is no difference in the tuning between the 99 Classics and 99 Neo, the drivers are the same. The difference in sound comes from the ear cup chamber and because of the materials used. We expected the change and experimented with the material.”

Not earth shattering but it is clear this is the sound they were seeking and are satisfied with the final product. 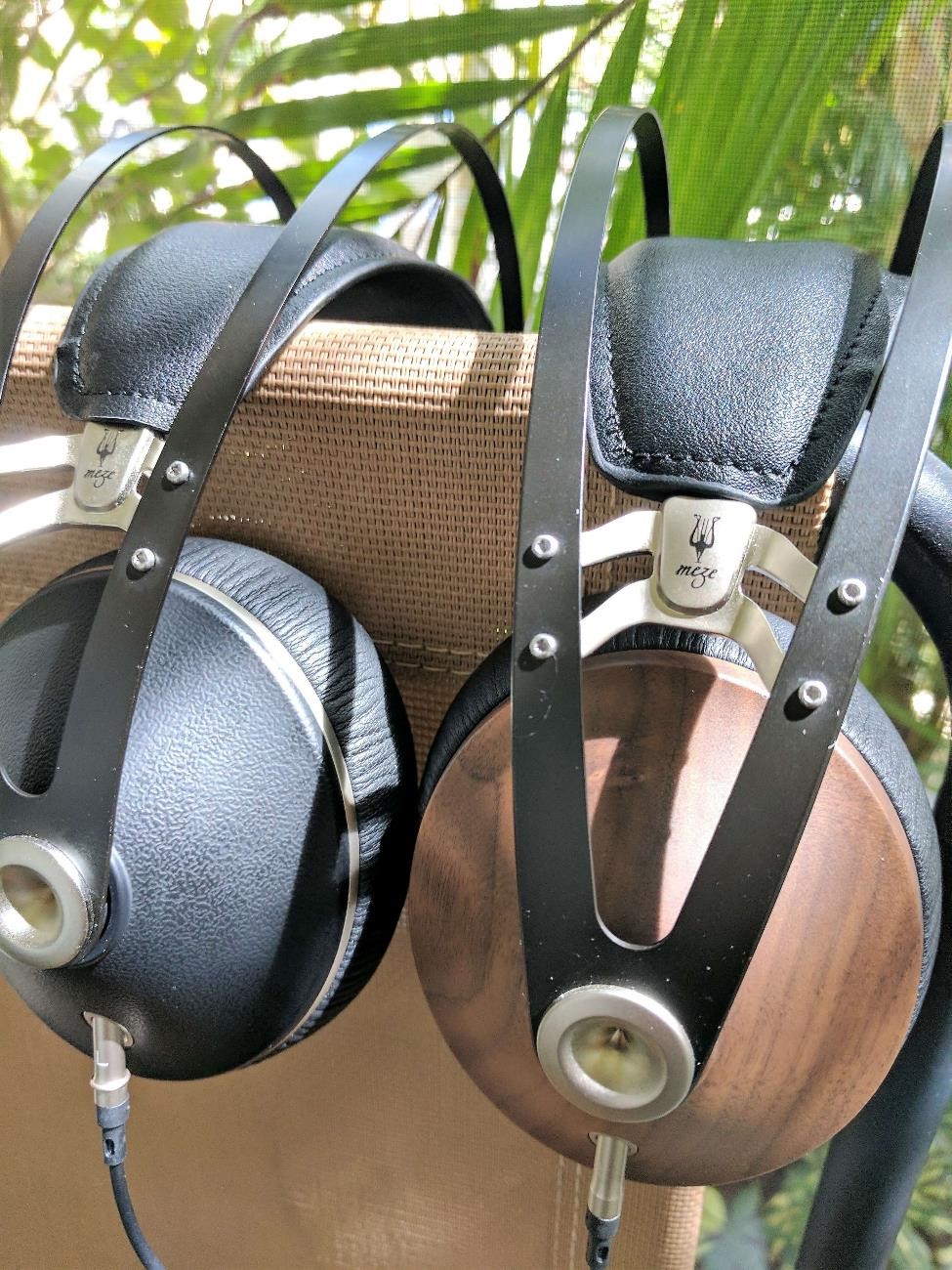 Conclusion:
An enjoyable experience. Meze has delivered two products that perform above their respective price points. At $249 I feel you would be hard pressed to find any other product that delivers an experience equal to the 99 Neo. The 99 Classics are listed at $309 so Meze offers you a couple of terrific options with aggressive pricing. Those of you that already the 99 Classics will enjoy a different sound signature. Those of you that have no Meze products have a choice to make. You will be happy with either one. I wanted to leave this review with a final sentence regarding my preference between the two. I know the question is “If you could choose only one which one would it be?” Fortunately, I have both and don’t have to answer the question. Insert mic drop meme here.